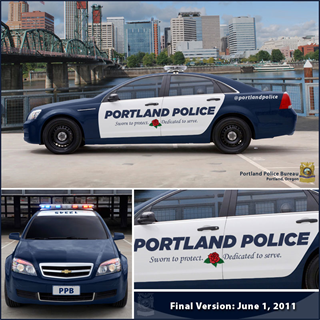 PORTLAND – The Portland Police Bureau announced the redesign of the graphics for their patrol cars on the Bureau’s Facebook page. According to a release from the City, the process for redesigning the look of the vehicles began earlier this year. The Bureau went through dozens of designs, including designs submitted by Bureau members, before accepting the new design (shown above). This new design will start to appear as new cars enter the patrol fleet. The Bureau said within 5 years, all marked patrol cars will have the new design.

The cars are solid blue with white wrapped doors. On the doors are the words "Portland Police" and below them is the slogan “Sworn to protect. Dedicated to serve.” The design displays a red rose between the words “protect” and “Dedicated.”

On the rear quarter-panel is the official Twitter handle of the Portland Police Bureau, “@portlandpolice.” The use of the Twitter handle is designed to encourage people to follow the Police Bureau on Twitter for updates, crime information, and to engage with people in the social media community.

According to the Bureau’s release, the redesign did not cost taxpayers anything.

The current design started with the 1991 Chevrolet Caprice. The 2011 Portland Police cars will be Ford Crown Victoria vehicles, but the Bureau is still considering the new Chevrolet Caprice PPV, Dodge Charger, and the Ford Interceptor vehicles (which is based on the Ford Taurus). The Bureau said Carbon Motors police-specific vehicle won't be available until late 2012 or early 2013 at the earliest.

Police Chief Michael Reese commented on the new design, saying, "We wanted to present a modern image of today's police agency on the vehicle, but we also wanted to give a nod to our past. Many officers have told me that they have always been proud to be a part of that sentiment and it clearly articulates our belief in how we want to serve the community."