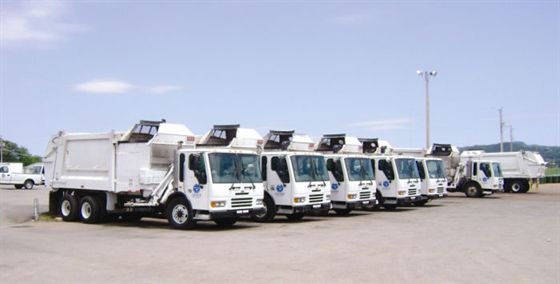 Trash collection has changed in municipalities utilizing automated trucks and units fueled by compressed natural gas (CNG). According to government fleet managers, such developments dictated maintenance practice adjustments. They highlighted how to strike a balance between revising tasks for new equipment while keeping up with the maintenance workload for more conventional refuse trucks and fleets as a whole.

"Probably the biggest maintenance issue we have is with the arm that lifts the garbage bins," said Mike Blankenship, equipment maintenance superintendent for the City of Huntsville. "It's got so many pivots, it's high-maintenance. We're constantly replacing pins and bushings."

Maintenance requirements for the arms are more or less the same, regardless of the manufacturer, Blankenship said. "We've got multiple types of equipment. We just continue to buy various types, thinking we're going to end up with the perfect truck some day, but there's none out there that are bullet-proof."

However, spec'ing automated greasers and lubrication systems for refuse truck arms has helped, Blankenship reported. In part, he indicated it also solved a management challenge in the department. The arms require daily lubrication and "just trying to stay on top of all the guys to do it has always been a problem," said Blakenship.

The City started spec'ing automated lubrication systems about five years ago. In addition to the arms, the packers also demand regular maintenance.

"Regardless [of the part], the biggest issue is the amount of moving parts," he said. "The more moving, pivotal parts, the more maintenance. When we went automated, that's where we learned maintenance costs definitely go up."

The City operates about 10 rear loaders for hard-to-reach places, such as alleys and lanes. The Huntsville city fleet numbers 2,700 pieces of equipment, of which about 1,400 units are rolling stock.

David Rodriguez, fleet superintendent, City of Burbank, Calif., said in switching to CNG-fueled refuse trucks, the fleet has benefited in reduced maintenance and repair costs. "The CNG engine seems to be bulletproof," he told Government Fleet (see "Burbank Refuse Fleet Goes All CNG," January 2010 issue). "Other than oil changes, we're not seeing any major component malfunctions," Rodriguez said. He noted the department did incur a cost for retrofitting the garage to work on the vehicles.

In some cases, maintenance savings are realized indirectly. The City of Baltimore said it expected to save approximately $6 million annually as a result of implementing route optimization software that should reduce mileage, and thus wear and tear, on the more than 60 garbage trucks it operates.[PAGEBREAK]

Meanwhile, the standard maintenance challenges remain, and the standard practices, well-tested over time, can keep a refuse fleet in good working order without busting the maintenance budget, fleet managers said. These best practices include paying special attention to brakes, tires, axle alignment, air and fluid filtration, cooling system, batteries, transmission linkages, and all chassis and body fasteners. Brakes and tires historically have rated particular attention because of the stop-and-go nature of refuse collection, which exacerbates wear on those components.

"We manage the vehicle as a complete unit," said Gary Smith, fleet manager for the City of Charleston, W. Va. "We don't single out certain areas, that is, unless we have a particular problem, say wheels coming loose or something along those lines."

"We maintain them every 90 days," the recommended interval, Smith noted. "That's going over them from one end to the other."

But that's not to say there aren't parts on the vehicles that must be watched more closely than others.

"The parts that take the most wear are the rollers in the back of the packing units," Smith said. "Those are a high-maintenance item."

Lubricating rollers is not a task to neglect. "If you don't lubricate them, they don't roll. When they don't roll they just skid along the channel, and that puts flat spots on them. Then they have to be replaced."

"We've got a real good maintenance inspection program. We inspect those trucks weekly. Every truck. And it's a thorough inspection, performed by a certified mechanic. Plus the drivers check them daily. It's required by DOT. That's probably been the most beneficial thing we've done - inspections," said Blankenship of Huntsville.

Some government fleets deal with refuse truck maintenance by outsourcing. They contract refuse collection to a private company, which is what Oak Park did years ago.

"It was a cost savings. To privatize was quite a dollar savings over doing it in-house," said Fleet Superintendent Fantetti. Before privatizing its refuse collection, Fantetti said, Oak Park's fleet operated a dozen garbage trucks. Fantetti said they required a lot of maintenance, mostly of the hydraulic systems.

Private contractors are the norm in Illinois today, Fantetti said, the result of a trend to privatization over 12 to 15 years, by his estimate. He doesn't see it slackening, either.

"Especially with what's going on right now with the economy," he said. "Everybody's looking to save money" because tax revenues have decreased in an economy still struggling to recover from recession. "If we can save money, we're going to do it."