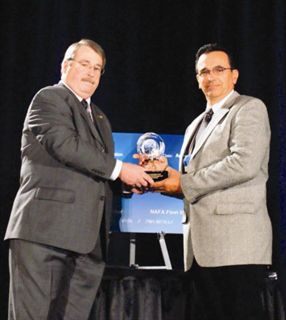 Each year NAFA recognizes fleet managers whose innovative ideas improved productivity or resulted in bottom-line savings for their employers. The Association, along with Bell Canada, presented its annual Larry Goill Memorial Quality Fleet Management Idea Award at the 2010 Institute & Expo this spring in Detroit.

One fleet manager awarded this year discovered an easy solution to a difficult problem. David Vasquez, manager of Fleet Operations for SECO Energy, entered the Goill Awards with an idea that actually helped his former employer.

"I'm honored that NAFA chose my project for a Goill award," Vasquez said.

Prior to joining SECO, Vasquez worked as director of fleet maintenance for Lake County in Tavares, Fla. While at Lake County, Vasquez recognized a large number of county vehicles were assigned as take-home vehicles without proper justification — a situation that negatively impacted the County's fleet budget.

According to Goill award judges, Vasquez' idea was a great example of a simple, low-cost solution that provided great savings and improved efficiency.

Vasquez developed a simplified process to justify vehicle assignments based on the percentage of commuting use versus business use.

"My vehicle justification model, which is based on NAFA's Lifecycle Cost Analysis, authored by Chris Amos, CAFM, several years ago, calculates vehicle assignment based on actual costs, defining cost of ownership by year, month, and mile," he said. "This model helps lower fleet costs."

The model has several user-adjustable parameters, including months in service and targeted mileage, and it compares those figures against the anticipated monthly use and mileage. In addition, it also breaks down the annual and lifetime costs of business use versus commuting use and compares the cost of a county-supplied vehicle against the IRS reimbursement rate.

The model features a decision-making formula that assesses whether a county vehicle assignment is more economical than employee reimbursement and whether an assignment can be justified based on anticipated mileage and business need.

"I started out using the model to justify requests for new-vehicle assignments, but ended up using it to highlight and reduce commuting use, which ultimately resulted in reducing the fleet size," he said. "The biggest bang for the buck came from the number of commuting miles that were avoided. The bottom line results in a break-even mileage cost that will support justification."

The County ultimately reduced its more than 110 dedicated take-home assignments to about 18 — half of which were left for Fire Rescue and emergency medical personnel.