When the City of Chicago’s Department of Transportation (CDOT) started implementing extensive operational and managerial changes in 2005, those changes touched the daily work procedures of CDOT workers in the street.

As part of the departmental overhaul, the CDOT installed workforce management software on hundreds of mobile phones used by road crew foremen. This step changed the way they started and ended their days, as well as how the foremen received assignments and reported crews’ progress on assignments.

The cell phones themselves were not new. Almost 500 CDOT foremen have carried mobile phones provided by the City for years. Until the workforce management software was installed, however, the phones were used conventionally, as a means for managers to keep in touch with foremen overseeing crews around the city to determine work progress and to advise foremen where to take the crew next, said Brian Steele, spokesman for the Chicago DOT. Records of all this activity — especially time spent and progress made at each site — were kept on paper. "We used a lot of paper," Steele said.

With the management software implementation, the amount of paperwork decreased substantially, since most routine record-keeping is now performed through the software on the phones. The software, Xora GPS TimeTrack, features a "wireless time card," for example.

"Our foremen use Xora to clock their shift — similar to the old days when one used to punch a time clock," Steele said. The electronic time card, displayed as a pull-down menu on the mobile phone screen, lists functions such as "start shift" and "end shift," "job start" and "job end" — all information previously recorded on paper in the field and turned in by the foremen at shift end.

"Now they indicate their task and their time electronically, and the information is transmitted to our in-house construction office," Steele said. Supervisors in the office access a password-protected Web site on which the information is presented in a variety of report forms.

"We’re able to call up the information on individual foremen and employees to track their tasks for a given day," Steele explained. "It’s been beneficial in helping us reduce paperwork and provide more accuracy to job-start and job-end times."

In addition to foremen, more than 80 consultants carry the software-equipped cell phones. Most are field engineers on job sites around the city. "There were no issues" with the consultants, Steele said, "but we wanted them to follow the same procedures as our in-house personnel."

Crew sizes range from three to four on pothole duty to 10 or more on a street resurfacing crew, Steele said. The CDOT fleet comprises the usual assortment of equipment needed for such work, including dump trucks, pickups, mixers, rollers, and backhoes.

Road resurfacing crews use the cell phones to indicate when they arrive at and depart the hot-asphalt plant. CDOT managers can review the time each crew takes to load its truck. 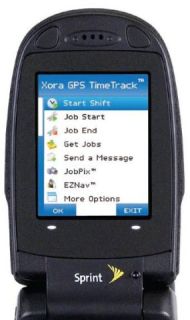 Additionally, the software works with the global positioning system (GPS) chip in the Sprint Nextel phones. The GPS is activated when foremen use the cell phone to click "Shift Start." From then until the user clicks "Shift End," the location of the phone, and by extension its user, can be tracked by CDOT office staff on a Web-based map projected onto a wall in the department’s asset management command center.

In addition to field staff locations, the map displays pending jobs. The combination of location and activity data facilitates CDOT response to service requests. For instance, when a crew in one area of the city needs help on a particular job, the CDOT can locate another crew in the vicinity and dispatch it where needed.

The CDOT also leverages reports generated by GPS TimeTrack that detail how long a crew has been at a given location and if a worker has turned off the phone. This information is e-mailed automatically to CDOT managers throughout the day.

The Xora software helped the CDOT cope with a greatly increased workload in 2007. That year, the department responded to 39,203 service requests, up from 24,157 in 2006. Steele said the increase resulted from greater public awareness of the city’s 311 telephone number for non-emergency services. The city conducted a publicity and outreach campaign, he said, and now "more people know the 311 system is out there. Any request — from needing a new garbage cart to reporting graffiti or seeking a sidewalk repair — goes through the 311 system," Steele said.

Previously, the CDOT reportedly required an average of more than 20 days to respond to requests to fill potholes. With implementation of the workforce management software, that time has been reduced to an average of three days. As a result, the city has seen liability costs for pothole-related incidents sharply reduced, Steele said.