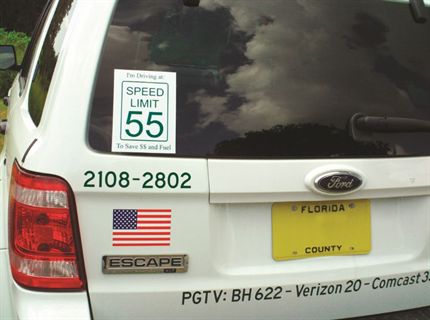 As fuel costs continue to fluctuate, how can a local government, whose services must continue based on the needs -- sometimes emergency -- of its citizens, mute the impact of fuel costs, especially when those costs rise uncontrollably?

By only reading industry publications, one might presume fuel conservation success can be achieved by technology alone through the use of alternative fuels, hybrid, or all-electric vehicles. The Clean Air Act of 1990 certainly steered governments in that direction and now, 20 years later, it's clear that legislation failed to achieve tangible results. Governments at all levels nationwide have collectively invested billions in technology, which at best has yielded marginal fuel conservation success, and at worst, the technology, hardware, and vehicles have been scrapped at enormous cost. A negative return on investment (ROI) is certainly hard to justify for any organization, public or private.

Like many others, Polk County, Fla., dabbled in the "technology du joir" with mixed results and achieved an unsatisfactory ROI.

In the summer of 2008, as fuel costs rose to historic levels, the clarity of two alternatives became evident. Government fleets can't take the same steps as private fleets, such as reducing the inventory of vehicles, adjusting routes, or consolidating trips.  As fuel costs rise, governments can either accede to the increases and cut expenses in other areas, or take proactive and perhaps dramatic steps to conserve fuel. This is the approach taken by Polk County.

Starting at the Source

Polk County already had an idle awareness program in place. It was downsizing vehicles and engine sizes and assuring vehicle utilization was maximized by monitoring utilization and repositioning or retiring vehicles that failed to meet utilization criteria. In summer 2008, Polk County went where few other fleets have gone -- to its drivers.

All studies show the largest single contributor to fuel use and/or conservation is the driver. Polk County decided the quickest route to meaningful fuel conservation was to target driver behavior and modify it where possible.

A three-pronged approach was used to modify driver behavior. First, the maximum travel speed of the County's on-highway vehicles was limited to 55 mph.An in-house Eco-Driver training program was developed to train, reinforce, and promote driving habits proven to reduce fuel consumption and assure driver buy-in, and the County added an incentive program to allow employees to share monetarily in their own conservation success.

Speed is a huge factor in fuel consumption and vehicle efficiency. Countless studies, both public and private, document the differential in fuel use at various speeds. Although study results vary slightly, they all reach the same conclusion about the efficiency benefits of operating a vehicle at 55 mph compared to higher speed operation. Most agree that operating a vehicle at 55 mph versus 65 mph yields a 15-percent fuel economy advantage.

Polk County is as large as the State of Rhode Island and its fleet operates more than 14 million miles per year. The potential benefit from slower speed operation was clear. Because safe vehicle operation is paramount in any vehicle-related decision, the County consulted with the sheriff's office and the Florida Highway Patrol to verify that such a reduction in speed, for a fleet of its size (2,158 on-road vehicles and 498 off-road units) wouldn't pose an undue hazard to fellow motorists. Both agencies approved the plan.

As a further advance measure, the County conducted informal travel time studies on various roadways to assure the limitation wouldn't impede employee productivity. The County found the time differentials amounted to only seconds.

The County affixed decals to the rear of its vehicles to alert fellow motorists that County drivers observe 55 mph speed limits to hopefully send them a message that we are taking extraordinary measures to conserve fuel. The decal also serves as a self-policing device that reminds County drivers that 55 mph is the limit.

As noted above, the driver is the greatest single factor influencing fuel economy. According to Bridgestone's Real Answers magazine, up to 35 percent of a vehicle's mpg is directly attributable to the driver.

The County endeavored to modify behind-the-wheel driver behavior by developing an in-house "Eco Driver" training program to educate drivers about the simple driving techniques that result in tangible mpg improvements.

With simple modifications, a driver can have a huge impact on the efficiency of an operated vehicle. The County's program draws heavily from County statistics and Ford's Web-based "Driving Skills for Life" program.

Eco-Driving has been embraced by companies worldwide. There is no shortage of source material from which to develop a simple, one-hour training program to implement fleet-wide. The training was conducted at various convenient locations during the employees' workday, and because the program took only an hour to present, it didn't represent a large investment of time, especially when considering the potential payback.

Did I say payback? How do you achieve and promote employee participation in a program such as this? Fortunately, Polk County employees are excellent. They understand their responsibility to the taxpayer and generally adopt actions management feels are important facets of their jobs.

The County went one step further however, by implementing a program that allows County employees to share in their own mpg success through the creation of an employee fuel conservation incentive program.

To participate, drivers complete the Eco-Driving skills training program and sign a simple, one-page contract agreeing to adopt and practice the techniques learned. Further, the contract includes a stipulation that if the driver is involved in a preventable crash, participation in the program will be terminated. It's presumed if a preventable crash occurs, the employee was probably not observing the Eco-Driving principles.

In return, the County agreed to monitor driver mpg over the one-year contract term and if the driver's mpg improved by 5 percent, the County would split the fuel savings by dollar with them on a 50/50 basis. The potential payout from this program for some drivers exceeded $300. One driver's actual incentive exceeded $450.

Not all drivers were eligible for the program. For example, unable to participate were drivers of emergency vehicles and transit buses, because they frequently "slip seat" (where one driver replaces another at the end of a shift).

Over the two years since implementation, Polk County achieved the following results:

These results are irrefutable. The overall hard dollar savings seen by Polk County due to these incentives have exceeded $1.5 million. The cost of the program is minimal. Beyond the $800 decal cost and the one-hour training time, the program has cost the County nothing.

As a result of its success, the Polk County School Board adopted the 55-mph restriction in May 2010 and the Florida Department of Transportation (FDOT) is currently studying the program for statewide adoption.

About the Author
Bob Stanton, CPM, CPFP, is director, fleet management for Polk County, Fla. He can be reached at BobStanton@polk-county.net.