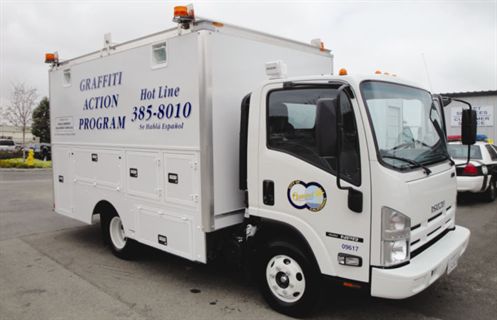 The trucks are a third-generation version of specially outfitted trucks used to remove graffiti throughout the city.  The vehicles are expected to average 36,000-plus annual miles and are the first of a cab-forward, diesel-powered design.  The short wheelbase of the cab-forward design allows for improved maneuverability. The diesel engine, with its mid-teens fuel economy, ensures the most economical operations.

"The new trucks increased graffiti crew efficiency while cutting operating costs in half and the crews love the maneuverability and ease of operation," said Dan Berlenbach, fleet administrator for the City of Oxnard.

Additional benefits of the new design truck include a 10,000-mile extended oil service interval, increased visibility due to the cab-over design and panoramic windshield, and an extended warranty.

Oxnard's graffiti crews formerly used pickup trucks and specially outfitted trailers for this task. Those truck and trailer combinations were hard to maneuver in tight alleyways and did not hold up to the hard service, according to Berlenbach. The new trucks have been very well-received by the graffiti crews who responded to 28,335 calls for graffiti removal in 2009.

The addition of the two trucks will enable the graffiti program to continue to perform this invaluable service for city residents.