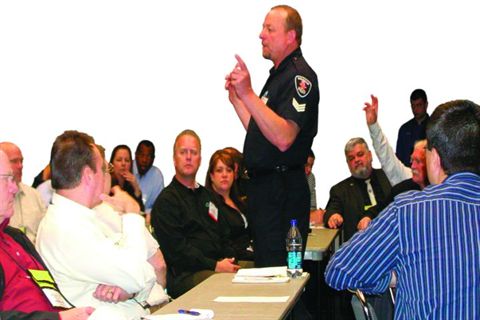 It's easy to be tempted by claims that an additive can improve gas mileage or that changing certain parts more frequently will reduce engine wear. But is there hard evidence to back those claims?

Sgt. William R. Hunt Jr., manager of fleet and logistics for the Windsor Police Force in Ontario, Canada, presented "Mythbusters: The Snake Oil Saga," at NAFA's 2010 Institute & Expo. His presentation marked the culmination of two years' worth of research and experimentation. His objective was to determine the validity of popularly held beliefs about products that purportedly boost fuel economy or diminish it.

Hunt called on two professors from the mechanical engineering department at the University of Windsor to oversee the lab work. Two Ford-certified Master Technicians employed by the Windsor Police Force drove more than 60,000 test miles in three vehicles: a 2000 4.8L V-8 Ford Crown Victoria Police Interceptor with 117,000 miles on the odometer and two 2005 Chrysler Sebrings with 65,000 miles and 41,000 miles, respectively, on their 2.7L V-6s.

Notes: This is one case in which the oil maker's claims don't necessarily match the myth in question. Rather, the company that produces the full synthetic simply states that switching from mineral blends to a full synthetic can extend oil life - a claim that Hunt's scientists were able to confirm in lab tests.

Test Results: Running on the same conventional 5W-30, the team calculated a base mpg of 23.97 for the Sebring with 41,000 miles. The techs added the prescribed amount of a popular oil and fuel treatment but found no discernable gain in mileage, despite manufacturer claims to the contrary.

Notes: The manufacturer's pitch seems to focus on better fuel economy rather than the more verifiable benefit of reduced engine wear. If you're wondering why, don't ask Hunt. "It does extend engine life, but this was not part of the parameters," he says. "I would have been very happy if they had promoted that instead."

Test Results: The Crown Vic logged 18.49 mpg with a factory-grade air filter. After replacing it with a leading performance-type aftermarket filter, the team found the big V-8's mileage had improved to only 18.5 mpg.

Notes: Hunt praised the filter manufacturer's marketing copy, which wisely relies more on personal testi-monials than actual claims. On the company's Web site, one customer reports a 6 percent improvement in the fuel economy of his light-duty pickup.

Test Results: Much like the aftermarket air filter, equipping the Crown Vic with a fuel-line catalyst resulted in a less-than-negligible gain in fuel economy: 18.52 mpg with the catalyst against the 18.49 mpg baseline.

Notes: The catalyst tested is, for all intents and purposes, one or more hunks of metal alloy that are dropped into the gas tank or fuel line and left there, supposedly, to boost oxidation. Unlike the products tested in the first three myths, the manufacturer's Web site clearly states that adding the catalyst will result in an increase of at least one mile per gallon.[PAGEBREAK]

Test Results: The Police Interceptor was equipped with a fresh set of spark plugs for its control run; they were then replaced with a set with 62,500 miles of wear, resulting in a 1.4 percent decrease in fuel economy.

Notes: Hunt puts this one in the 'myth' category because he personally predicted a dropoff of at least 5 to 6 percent. That may still be the case for older vehicles; however, Hunt's scientist friends told him the Crown Vic's 10-year-old onboard computer software was able to recognize the slower-firing plugs and compensate accordingly.

Test Results: Hunt's crew put duct tape over half of the Crown Victoria's already-used, factory-grade air filter for the initial run, then replaced it with a fresh filter. Adding the duct tape did nothing to compromise the car's fuel economy baseline of 18.49 miles per gallon, but replacing it with the new filter did: Running on a fresh-from-the-box, OEM filter, the Police Interceptor logged only 18.3 mpg.

Notes: In another surprise for Hunt, a report from his mechanical engineers found that the onboard computer worked hard to compensate for worn parts. "The spark plugs got me, but I figured there was no way this one would," Hunt says. He did note, however, that the driver "noticed a lack of power" with the clogged and duct-taped filter installed.

Test Results: Decreasing the Crown Vic's tire pressure from the factory-specified 32 pounds per square inch to 22 psi resulted in a dramatic decrease in mileage - 16.17 mpg vs. the 18.49 mpg baseline.

Notes: Reducing the pressure by 10 psi might seem drastic, but, from behind the wheel, Hunt's tech said he felt most drivers would not notice the difference. Due to the dangers inherent to driving on underinflated tires, Hunt limited the vehicle's speed to 50 mph for this experiment. 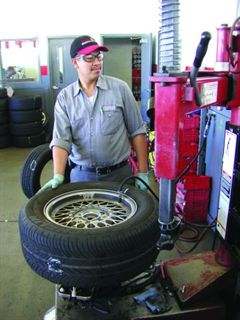 Notes: Hunt relied on interviews with scientists and other experts working in the fields of tire manufacturing, compressor supply and mechanical engineering to determine the veracity of this claim. In the end, he declined to categorize it as "myth" or "fact," but did list the many known benefits of nitrogen fill vs. regular air. He
also stated, however, that none of the 20 experts he consulted could justify the added cost for any fleet outside the military or aviation segments, and that none had filled their personal vehicles' tires with nitrogen.

In conclusion, Hunt says, "As a fleet manager, you really need to keep an eye on the world around you. You can make anything work in the lab, but when you put it in a real-world setting, you won't get the same results. Results will change both positively and negatively. In our tests, some products worked and some didn't work. The trick is to find the ones that work without spending a lot of money."