Part of the Environmental Protection Agency’s (EPA) job is to ensure clean air for all Americans. In doing so, they’ve imposed increasingly strict limits on emissions for on-highway engines such as street sweepers. In fact, the EPA has announced higher standards for NOx emissions in 2010. Clean air is important, but higher standards also mean changes in the automotive industry that can be tough to meet. Despite these challenges, Elgin Sweeper continues to meet EPA and market needs. 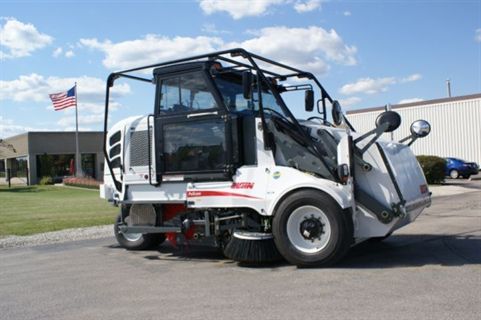 The new EPA standards call for a 90-percent cut in NOx emissions. Elgin is working to meet the new standards by developing and offering ultra low emission, alternative-fueled sweepers. For instance, markets that require emissions even lower than the EPA 2007 standards can purchase vehicles powered by natural gas or propane as opposed to diesel fuel.

"Even before Elgin Sweeper shipped the first EPA 2007 emission sweeper, instructions on how the new emission control systems work were sent to the Elgin Sweeper dealer network so end customers could be adequately trained on proper diesel particulate trap regeneration as they received their new sweepers," Giles said.

Giles noted many engine manufacturers have not yet announced compliance plans for 2010, so sweeper manufacturers don’t yet know the full potential impact to the product. However, when purchasing a sweeper, Giles advised fleet managers to choose one with proper safety and operational characteristics.

"These issues likely will be even more complex for EPA 2010 emissions," Giles said.

While sweepers that meet the new regulations clearly will be more environmentally friendly, this clean-air initiative places some of the burden on fleet managers in terms of budgets.

"As emission controls continue to become more complex and sophisticated, both sweeper acquisition cost and cost of ownership will rise," Giles said. "Fleet managers need to understand sweepers equipped with the new diesel particulate trap technology will cost significantly more to acquire, burn more fuel, require more maintenance and the operator to understand and be able to regenerate the diesel particulate trap."

Changes to the infrastructure may be required, too.

"In 2010, it is now commonly believed the additional injection of urea into the exhaust after-treatment device will be required," Giles said. "While this may lessen some of the diesel particulate issues, it will also require the infrastructure to have urea at every fueling island, something that doesn’t exist today."

Giles suggested the most important measure fleet managers can take is planning for the increased purchase cost and additional maintenance support required for the new emissions sweepers. At the same time, he also noted benefits of the new standards.

"The new emissions requirements will certainly benefit the community with cleaner exhaust emissions. Fleets may find the benefit of finding cleaner vehicles, since there is little or no soot trails on any of the equipment," he said.

While 2010 EPA standards will present clear challenges, Giles said there are more to come. "The real challenge to sweeper manufacturers will come with EPA Tier 4i and EPA Tier 4 off-highway engines that operate many types of sweepers. These changes to the sweeper engine will be similar to the EPA 2007 on-highway changes, but there won’t be a chassis manufacturer to help share the task," he said. "Like the upcoming EPA 2010 on-highway engine changes, many engine manufacturers have yet to announce exactly how they will comply with the new emission standard, so for now, it’s ‘wait and see’ for sweeper manufacturers."