When battling rising fuel costs, there isn’t one specific method of cutting back on fuel spend. However, GF caught up with several public sector fleets to discover their particular strategies. Here are methods that have proven helpful for these fleets.

Not only is going green good for the environment, it’s also proven a popular approach to cutting back on fuel costs. From biodiesel and vegetable oil to hybrid and electric vehicles, these fleets have managed to save money on fuel, while reducing greenhouse gas emissions.

Green efforts in Culver City, Calif.’s fleet save $425,000 in annual fuel costs. Since 1998 the fleet has been using compressed natural gas (CNG), beginning with the introduction of 20 transit buses to its 600-vehicle fleet.

The City of Fort Wayne, Ind., operates a fleet of 1,652 vehicles, which include sedans, vans, SUVs, pickups, light- to heavy-duty trucks, fire trucks, heavy construction and snow removal equipment, and mowers. On top of reducing emissions by 50 percent, switching to hybrid, E-85, and B-20-powered vehicles has also saved the fleet a total of $13,256 since 2005 (based on $2.12/gallon).

At the State of Illinois Central Management Services, State Fleet Manager Barb Bonansinga operates a fleet of 12,200 units, more than 5,000 (41 percent) of which are biofuel-ready vehicles, including four first-ever Ford E-85 hybrids. Alt-fuels have been used since 1992, hybrids since 2005. Alt-fuel consumption is now 25 percent, with E-85 consumption doubled to 300,000 gallons and biodiesel use now at 2 million gallons. The fleet has acquired 42 hybrids averaging 30-percent improved fuel efficiency over conventional counterparts. Use of the fleet’s more than 2,356 E-85 vehicles has reduced CO2 emissions by an estimated 20 percent. Projected savings in fuel efficiency is approximately $24,300 annually.

In 2006, Sam K. Houston Jr., division chief for City of Jacksonville, Fla.’s fleet management division, began building a biodiesel plant with capacity to produce 2,000 gallons of fuel each week. "When fuel was $1 a gallon, this wouldn’t have been cost-effective," said Houston. That year, however, his more-than 5,000-unit fleet ran up a fuel bill of $15 million. The less expensive, homemade blend saves about $150,000 annually. "The cost of processing a gallon of biodiesel is about 70 cents," Houston estimates.

King County, Wash., began purchasing hybrid cars in 2001 and currently has 167 in its fleet. Hybrid sedans average 44 mpg, versus previous 24-mpg vehicles. Annual savings from the hybrid fleet is $95,000.

King County also operates CNG Honda Civics, which can increase fuel efficiency by about 45 percent compared to the vehicles they replaced. The County has one plug-in hybrid-electric vehicle (PHEV), with another four scheduled for delivery in March. This will allow the county to substitute low-cost electricity from the grid for high-cost petroleum. The cost-per-equivalent gallon using electricity is about 45 cents per gallon, compared with the cost of gasoline at $2.85 per gallon.

According to Fleet Manager J.D. Schulte, the City of Moline, Ill., currently has 28 units that operate on E-85, with three hybrids scheduled for purchase this year. In 2007, the 28 units used more than 7,200 gallons of E-85 fuel and the average cost paid by the City was $1.96 per gallon. The average price paid for a gallon of 87 octane unleaded during the same period was more than $2.60 per gallon, making E-85 use the more cost-effective decision, even factoring in the 16-percent loss in fuel economy. The City also benefited from an Illinois rebate program that reimbursed $340 for each flex-fuel vehicle (FFV) that traveled more than 5,000 miles in 2007. The City’s 2007 rebates should exceed $8,000. The City is adding another 20 FFV units to the fleet this year.

The City of Moline’s truck and construction fleet operates exclusively on B-20 and has used more than 150,000 gallons since April 2006. Illinois also offers rebate programs for the use of B-20 blends or greater, reimbursing agencies qualified for any incremental cost difference between biodiesel and diesel fuel during the year. In 2007, B-20 was actually lower in cost, on average, than diesel fuel, so the savings was realized by the purchase of the fuel rather than the rebates.

The City of Wilmington, Del., cut $185,000 in acquisition costs by reducing fleet size by 11 units and adding two hybrids.

The City of Inglewood, Calif., has addressed various areas within the fleet to reduce cost to the taxpayer. Run by Fleet Manager Rick Longobart, in 2004 the City adopted a six-year alternative-fuel plan to replace 146 vehicles with alternative-fuel types. The City has converted and purchased more than 65 vehicles that now operate on CNG, propane, and electric and hybrid technology, and installed a CNG and propane fueling station. The City has also adopted and uses B-20 biofuel in all diesel vehicles. Only five on-road vehicles exist in the fleet that require diesel. The remaining vehicles operate on alternative energy, biofuel, or gasoline.

The City of Peoria, Ariz., is currently considering the use of CNG or LNG to power its refuse fleet, street sweepers, and other high-mileage vehicles that can use alternative fuels. Fleet Manager Warren Laing forecasts an approximate annual savings of more than $100,000 in fuel cost.

The City of Arlington, Texas, improved fuel efficiency by 20 percent with use of hybrid vehicles.

The Village of Algonquin, Ill., has substituted biodiesel with used vegetable oil to fuel its fleet vehicles. Fleet Manager Vince Olsen said the use of vegetable oil has saved the Village more than $7,000 since 2005. 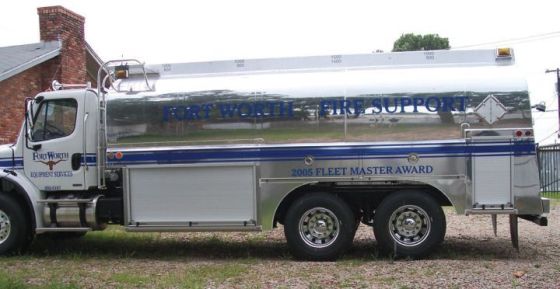 Fuel cards. A fuel card can save money for fleets that buy from retail commercial outlets by restricting unauthorized purchases, and purchases of more expensive — and often unnecessary — premium and super-unleaded grades of gasoline.

Fleet manager for the City of Fort Wayne, Ind., Larry Campbell says fleet card use reduces fuel consumption. "This card is primarily used by the police fleet so that they can drive to a local convenience store to get fuel rather than consuming more fuel by driving more miles across town to a city fuel site," said Campbell. Savings have been approximately $750,000 over eight years.

Volusia County, Fla.’s fleet fuel card program allows vehicles to fuel anywhere in the county, instead of the nearest county fueling station. The card is MasterCard-based, adding to its convenience. The fleet has also been taking advantage of the state’s price agreement, saving money that would have been used on a bid. Rebates are rolled back into the price of fuel, so the County saves 2-5 cents per gallon off the pump price on fuel.

Illinois Central Management Services has used fuel cards since 2001. Among its benefits, fuel cards have helped track overall fuel consumption, eliminated use of premium fuels, and directed spend to lowest cost locations. Savings for using non-premium fuels is projected at about $50,000 annually. Illinois State Fleet Manager Barb Bonansinga said the fleet also received a $2.50 premium for each card at program inception as a discount and a check for $25,290 total discount on fuel costs.

The City of Fort Wayne, Ind., monitors fuel exception reports daily. Since 2004, the fleet has saved $57,076, according to Fleet Manager Larry Campbell.

Illinois Central Management Services has been monitoring reports since 2001. Agencies are required to use and monitor fleet card exception reports for greater accountability and prevention of theft and abuse. Agencies now have periodic and annual report review requirements for greater security and oversight. Approximately $20,000 worth of fuel card theft or potential theft has been discovered since 2006.

The City of Fort Worth, Texas, also uses a fuel contract, involving a "coalition" of 27 government entities to date to buy fuel in bulk. The coalition helps increase negotiating power with fuel vendors to drive down fuel prices. In addition, bobtail trucks are used to transport loads, reducing delivering costs by delivering larger volumes throughout the city.

Volusia County, Fla., has also collaborated with several agencies to increase its bid and discount on fuel.

Cut Back on Idling

According to Ford Motor Company research, one hour of gasoline engine idle time equals 33 miles of driving. Though idling is justifiable for PTO operations, idling for long periods of time wastes gas and money.

Between 2006 and 2007, the City of Fort Wayne’s 1,652-unit fleet saved a total of $86,873 using a diesel idle reduction program. According to Fleet Manager Larry Campbell, drivers used to let engines idle all day, sometimes never even using the truck expected to pull equipment to the job. To combat this, 80 trucks are now programmed to shut off after 10 minutes of idling, which has saved 24,000 gallons of diesel, a 12-percent fuel savings.

King County, Wash., implemented an anti-idling policy in April 2007. Under this policy, "Employees shall not cause or permit vehicles covered by this policy to idle for more than three minutes in a 60-minute period, except as allowed under specific policy exemptions." Estimated savings from the anti-idling policy is 100,000 gallons, approximately $285,000.

The City of Thornton, Colo., has installed hydraulic system heaters on outdoor vehicles exposed to cold temperatures to reduce refuse truck idle time. The systems use diesel fuel from the vehicle tanks to heat the engine. Prior to installation, each morning an operator had to bring the hydraulic fluid up to operating temperature before starting the route, a process that could last 20 minutes to more than an hour. "The heater units are designed with a timer and burn about one-sixth the amount of fuel as compared to the engine running. Now an employee is able to perform inspections and begin the routes within a very short period of time," said Fleet Manager Jim Gilbert.

GPS has been used as a tool to track idling and costs. The City of Inglewood, Calif., reduces cost through the use of GPS on more than 32 vehicles, which improves routing and performs a method of identifying utilization. This allows the City to reduce vehicles from fleet, hence reduce maintenance and fuel cost. 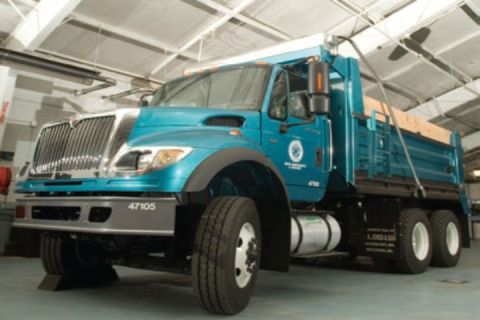 Get Rid of the Gas Guzzlers

Illinois Central Management Services has right-sized its fleet since 2003. Fleet has been cut by about 1,600 vehicles. "It’s estimated the fleet used approximately 1.4 million fewer gallons of fuel between the 2004 and 2005 fiscal years," said State Fleet Manager Barb Bonansinga. Total gallons dropped from 14.1 million in FY-04 to 12.7 million in FY-06, an estimated $3.8 million savings, based on price per gallon of $2.75.

Volusia County, Fla., has established lifecycles for each fleet vehicle type. Utilization reports are run every year. Vehicles utilized less than 1/3-1/4 of the median miles per class are subject to fleet "right-sizing." Lifecycles for lesser-used units have been extended to maximize utilization. Replaced or right-sized vehicles in the best condition are placed into the motor pool or cascaded to other departments to replace older units. A centralized motor pool of 30 vehicles was checked out 771 times in 2007. Total right-sizing, lifecycling, and utilization savings were more than $400,000 last year.

The City of Moline, Ill., fleet met with departments to discuss right-sizing opportunities during vehicle replacement. "Everyone wanted to be a team player," said Fleet Manager J.D. Schulte.

One of the most significant savings has come from replacing full-size trucks and cars with subcompacts for inspectors. "All inspectors’ vehicles have been replaced with either subcompact LEV (low emission vehicles) or subcompact FFV (flex-fuel vehicles). We have projected the lifecycle savings on fuel cost alone to be over $3,300 per vehicle," said Schulte.

The cities of Peoria, Ariz., Fort Wayne, Ind., Fort Worth, Texas, and Colorado Springs, Colo., also use right-sizing strategies to reduce fuel consumption. "Old habits are hard to break, but with the rising cost of fuel, many departments are starting to see the necessity of change. The old way is no longer acceptable," said Warren Laing, fleet manager for the City of Peoria.

"It would have cost us an additional $484,000 in 2007 had we not been adhering to these practices," said Fleet Manager Windell Mitchell.