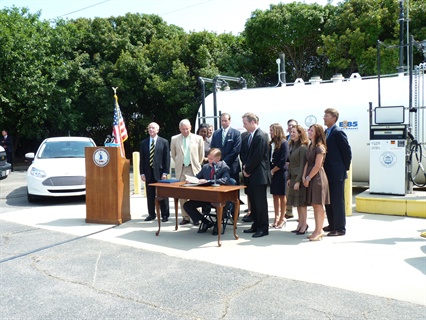 RICHMOND, VA – Virginia's Governor Bob McDonnell signed two bills that promote the use of alternative fuels in the State fleet and an executive order that sets a development path for the State’s alternative fuel plan, according to a news release from the State.

The first bill requires the director of Virginia’s Department of General Services, along with the secretary of administration and the governor's senior advisor on energy, to develop a plan to replace State-owned vehicles with alternative-fuel models, “to the greatest extent possible.” The second bill allows retailers in Virginia to offer electric vehicle charging stations for drivers.

A wide range of vehicle types were represented at the signing ceremony, which you can see in a photo gallery here.

McDonnell’s executive order directs the release of a public-private partnership solicitation to create a plan to move the State’s vehicle fleet toward greater use of alternative fuels (with an emphasis on domestically produced alternative fuels).

It also directs the State’s Department of General Services and the Department of Mines, Minerals, and Energy to begin monthly briefings on this initiative in August 2011 and determine whether to proceed with a Public-Private Education Facilities and Infrastructure Act (PPEA) by no later than May 2012, with a goal of completing negotiations for this agreement by no later than July 2012.

"As we continue on the path toward making Virginia the 'Energy Capital of the East Coast,' it is important that we pursue all practicable and cost-effective options to promote the use of alternative fuel vehicles,” McDonnell said. “Increased use of alternative fuel vehicles holds the potential to help reduce our dependence on foreign oil, support the expansion of private-sector businesses and create new jobs here in the Commonwealth. This potential is why, in my administration, Virginia is pursuing an 'all fuels approach' to the vehicles it uses in conducting its business. The legislation and executive order that I am signing today will provide the private sector an opportunity to develop creative partnerships to help the commonwealth meet its goals.”