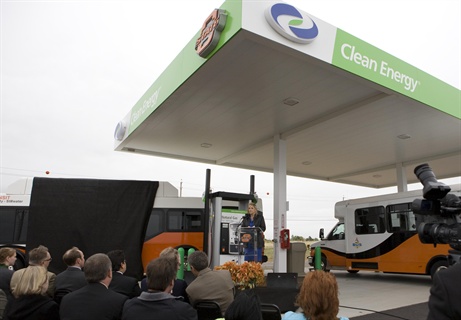 According to the University, OSU has converted its entire fleet of transit buses and many fleet vehicles to run on compressed natural gas (CNG). Chris Hoffman, manager of transportation services, stated that OSU currently operates 18 transit buses and 15 dedicated CNG sedans. In addition, about 120 vehicles (pickups, vans, and sedans) are scheduled for conversions.

“This is a great example of how a large public entity like Oklahoma State University can make a real difference and be both fiscally and environmentally responsible,” said Governor Fallin. “By converting their vehicles to natural gas, OSU is saving the state money through lower fuel costs while promoting the use of a fuel that is abundant in the state of Oklahoma.”

The University expects the station will help reduce the University’s energy costs. The fueling site, operated by Clean Energy, will also be open to the public.

The U.S. Department of Transportation's National Highway Traffic Safety Administration (NHTSA) and the U.S. Environmental Protection Agency (EPA) will increase the stringency of corporate average fuel economy (CAFE) and CO2 emissions standards by 1.5% each year through model year 2026, as compared with previous standards that would have required about 5% annual increases.

Each EV ARC solar-powered electric vehicle (EV) charging station includes an emergency power panel and can be relocated for city events or in case of emergency power needs.

Early in 2020, Mack Trucks handed the keys to its first fully electric refuse truck to the New York City Department of Sanitation. Equipment Editor Jim Park gives us a tour of the truck and a few early driving impressions.

Oregon will develop a new policy for state agencies for procuring zero-emission vehicles.

The Cummins Westport B6.7N natural gas engine recently received certifications from both the U.S. Environmental Protection Agency and the California Air Resources Board.