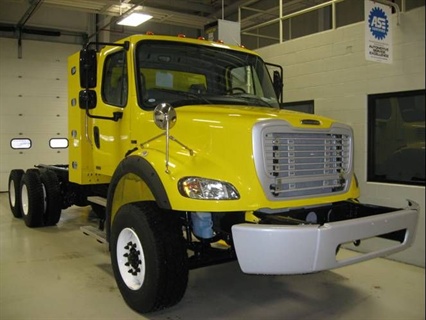 COLUMBUS, OHIO – The City of Columbus is building a compressed natural gas (CNG) fueling station to run the 24 new and dedicated CNG-powered vehicles it’s adding to the fleet in 2011. Out of a fleet of  approximately 6,300 vehicles, Columbus is replacing vehicles that consume lots of fuel, specifically trash trucks, dump trucks, and street sweepers.

“We have specifically targeted the highest polluters in our Fleet with 13 of the incoming units being refuse trucks, consuming about 4,000 gallons of fuel per year. In relationship to that, a dump truck may consume only 1,500-2,000 gallons per year. Nonetheless both types of these units are heavy users of diesel fuel with low MPG.”

At this point the City hasn’t scheduled specific vehicle purchases beyond the initial 24, but Columbus’ Fleet Administrator Kelly Reagan said the City intends future CNG vehicle purchases, along with additional CNG sites across the city.

In one case, Reagan said the City placed one refuse “rear-loader” model in service last year (over a nine-month period only), which saved approximately $5,800 in fuel costs.

“The Department of Public Utilities also has several CNG ‘light-duty’ units that have been using CNG in the last few years, but this round of purchases is by far our full-fledged commitment to CNG fueling technology,” said Reagan.

Beyond going green, the cost of CNG was a major reason Reagan said the City went with this fuel source.

“Another huge benefit to CNG is that the cost is substantially lower than diesel,” Reagan said. “We anticipate conservatively a 50 percent reduction in our costs per gas gallon equivalent (GGE), and this resource is plentiful in North America. I recently heard at the NTEA Conference from Doyle Sumrall, a director with NTEA who said, ‘While petroleum-based fuels are not getting any cheaper, CNG is an expanding resource.” 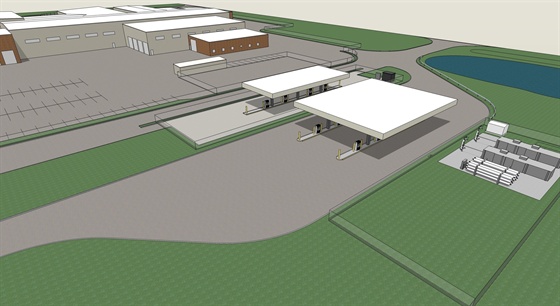 “The city has been planning the station in conjunction with vehicles for the last several years, all in an effort to comply with  Mayor Coleman's  Green Action Plan, reducing our carbon footprint, reducing dependency on foreign oil, and leading the charge to ‘be green,’” Reagan said.

Even though Columbus’ primary focus has been reducing emissions, Reagan said the City will experience significant fuel savings in the coming months.

“We calculate that the first infusion of 24 vehicles will reduce carbon emissions by over 520 metric tons per year this is the equivalent of taking 100 passenger vehicles off the road per year,” Reagan said. “It is proven that through the EPA, CNG produces significantly lower amounts of harmful emissions such as nitrogen oxides, particulate matter, and toxic and carcinogenic pollutants as well as the greenhouse gas carbon dioxide. We expect to eliminate about 40,000 gallons of diesel fuel per year with this second round of dedicated CNG vehicles, saving approximately $60,000 to $90,000 per year in fuel costs.”

As with many government organizations that made the decision to “go green,” Columbus had to decide where to invest. In this case, the Columbus decided to pioneer efforts to develop infrastructure, cut emissions, and control fuel costs by using alternative fuels. Although the City could have first purchased CNG-fueled vehicles, the lack of available fueling infrastructure was a challenge, which led to funding for the CNG station once the City made the commitment to CNG as a fuel source.

“The challenge in the Midwest has been the old ‘chicken or the egg,’ which comes first. So in response to this dilemma, Mayor Coleman decided that the city would pioneer CNG in the Midwest, creating the infrastructure for others to follow,” Reagan said. “We believe that both public and private sector entities will come to fuel at our stations, and we welcome the cooperation in using a fuel that reduces our dependency on foreign oil and reduces our carbon footprint by up to 90 percent for every vehicle placed into service.”

Although economics were not the driving force to move to this fuel alternative, it would appear that the city of Columbus has made the best decisions for all the right reasons. They hit a home run by cleaning up the environment, reducing their dependency on foreign fuel, and saving the tax payers of Columbus $4-$5 per gallon in fuel costs. By owning the sites, the City will become the “market-maker” working to keep costs down for this alternative fuel, thereby encouraging other public and private entities to follow with dedicated CNG vehicles.