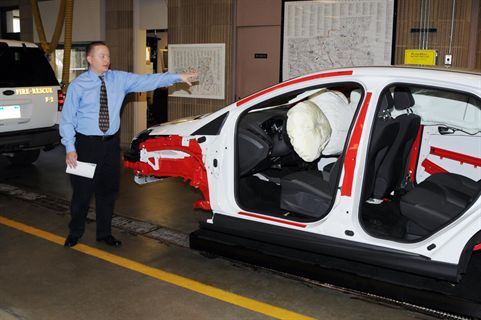 DEARBORN, MI - Ford Motor Company is using one new Ford Focus and a dozen other modern vehicles to help train first responders. The new 2012 Focus, which contains high-strength materials and advanced safety features and airbags, is the latest teaching tool to educate members of the Dearborn Fire Department on how best to use their new extrication equipment in rescue situations, according to a release from Ford.

"It's important that our personnel have real-world experience using extraction methods on vehicles made with modern materials so they are best prepared to save lives at the scene of an accident," said Richard Miller, chief of the Dearborn Fire Department. "Knowing their commitment to first responder training, we reached out to Ford and asked them to supply cars for this exercise so that Dearborn firefighters could train and test our new equipment on a broad range of vehicles."

More than 100 Dearborn firefighters received training last week with new extrication equipment, commonly known as "the jaws of life," that the Dearborn Fire Department obtained through the Assistance for Firefighters Grant Program. With roughly twice the cutting strength as the department's old equipment, the new tools are more effective cutting through higher-strength steel, such as the boron steel used in the 2012 Ford Focus and other models.

Since 1990, Ford has provided more than 2,000 vehicles to give first responders the opportunity to train on modern vehicles. Ford is also supporting a company that is developing an extrication training video series that will be available to fire professionals nationwide in 2011.

In 2009, Ford's training efforts included helping to stage the first known emergency responder training event specifically focused on hybrid vehicles. Following the introduction of its first hybrid model, the 2006 Ford Escape Hybrid SUV, Ford began publishing emergency responder hybrid vehicle guides with instructions on how to quickly and safely disable the vehicle's electrical and battery systems before attempting to rescue occupants, according to the company.