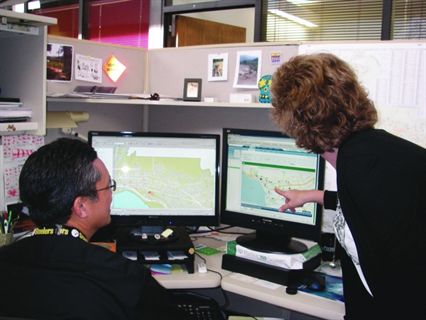 Located between Southern California cities Malibu and Santa Barbara on the Pacific Ocean, the City of Ventura provides a wide range of services to more than 109,000 residents. The City's operating philosophy not only embraces cost efficiencies, but also focuses on sustainability efforts.

In 2007, Ventura's City Council adopted the Green Initiative, the first of many steps toward the City's goal of becoming a national model for sustainability. Since its adoption, the City has completed a Greenhouse Gas Inventory, as well as joined the Sierra Club Cool Cities Program and ICLEI Local Governments for Sustainability (an association of more than 1,200 local government Members who are committed to sustainable development).

As part of its green initiative to become more environmentally friendly, the City partnered with Alert Communications in 2008 on a pilot program aimed at increasing fuel efficiency and reducing exhaust emissions in city vehicles. The City mounted specially equipped Networkfleet global positioning system (GPS) units it purchased from Alert Communications to diagnostic ports in seven of its fleet vehicles.

The Networkfleet device is connected to the Vehicle Harness connector in each vehicle. In addition to their remote mapping feature, the Web-based Networkfleet GPS units quickly pinpoint vehicles with excessive speeds or idle times, report potential diagnostic problems in vehicles, improve efficient routing of services to the community, and provide mileage/hour information that is used to notify users when vehicles are due for normal maintenance, thus reducing repair costs and vehicle downtime.

"This is a great tool that complements operational efficiencies and the safety of employees," said Mary Joyce Ivers, CPFP, fleet and facilities manager in the City's Public Works department. "The maintenance alerts help notify the Fleet Maintenance supervisor prior to any major repairs or mechanical ­failures."

Networkfleet can be set up in some states that would eliminate the need to have vehicles physically smog-tested. It also provides information on the most efficient routes for delivery of the City's Public Works services to the community. One example of more efficient routing involves the pothole repair truck being able to plan its daily routes to maximize the number of pothole repairs in a day.

"In the Water department alone, we're saving $10,000 per year in fuel and maintenance costs," Ivers pointed out. "For waste water vehicles, it could be up to $1,200 per year, per vehicle because of better efficiency of knowing where they are going."

While the drivers were initially concerned about "Big Brother," it was explained that the purpose was to provide information to improve the City's route efficiency, gather GPS data for filling potholes, and provide workgroup locations so the supervisor could send the closest employee to a call for service.

Ivers communicated the initial pilot test and associated benefits to the drivers via a memo sent on behalf of the supervisors.

Based on the success of the pilot program and additional rollout, Ivers hopes to expand Networkfleet to more vehicles as they come up for replacement.