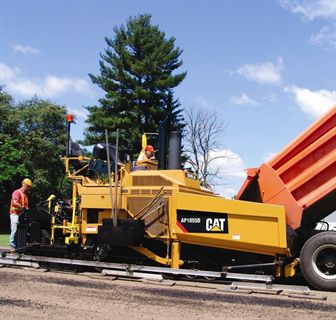 Keep it clean. That's the first and last rule in maintaining pavers, manufacturers say, though there are a few other principles that should be followed, too. (See sidebar, "Common Mistakes When Maintaining Asphalt Pavers.")

"If you keep the machine clean, the rest of it's pretty easy," said Bryce Davis Jr., general sales manager, North America for paver manufacturer LeeBoy. However, like many things, keeping a paver clean is often easier said than done.

"It's the biggest hurdle to master," Davis said. Crews should take time at the end of the day to scrape asphalt from the machine, he advised. A convenient time is while waiting for a truck to pick up the paver, Davis said. Being conscientious about the end-of-day cleaning pays off. "If asphalt gets hard, it's five times harder to get it off the machine -- it gets like the road surface."

Attentively following the basic maintenance principles is smart for many reasons, especially financial. "If you're not maintaining the machine," Davis said, "it's probably costing you triple to operate. You'll probably be replacing it in a shorter time -- at a faster rate -- for a worse return on investment."

Typically, a paving machine will require only minor maintenance work up to the 3,000-hour mark, Davis said. At 3,000 hours, it will usually be due for a major overhaul, including new pumps, motors, etc.

Users of LeeBoy pavers, including government fleets, tend to purchase rather than lease the machines, because they usually are used steadily for patching as well as putting down new paving, Davis noted.

Mark Bolick, parts and service manager for LeeBoy, stressed the importance of lubricating the machine for two reasons. It makes cleaning off asphalt easier and it eases the play of the machines' many moving parts.

"We have a material that sets up when it gets cold," Bolick said of asphalt. "When it's hot, it doesn't stick at all. But when it gets cold, we have to use some form of a release agent to keep the asphalt from sticking to the metal when it gets cold. Our manual cites [the need for] a cleaning solution or release agent." That makes the job of scraping off asphalt easier, Bolick said. And the machine should be lubricated after the end-of-day cleaning and again in the morning, before use, for good measure. "It's just like coating a cooking pan with oil," Bolick said.

He added that "a good operator will hit the bad spots daily and weekly will put a shot or two in the depth screws." At the back of the machine, the depth screws control the angle of a plate that in turn controls the depth of the material. The constant turning requires regular lubricating to maintain reliable operation. Bolick also said it's important to use the appropriate heat temperature grease in the bearings. "That keeps everything working correctly," Bolick said.

"On our machines we've got extension slides that have chrome rods," Bolick pointed out. "You want to keep those chrome rods clean and free of dirt and debris so they slide in and out freely."

What about the machines used for demolishing what the pavers put down? P.J. Mead, customer service manager for Asphalt Zipper, had some tips for fleet users, some that mirror the care one must take of pavers, and some that don't.

There are three different aspects to caring for the type of machine that Asphalt Zipper manufactures, Mead said: scheduled, periodic maintenance; replacement of parts that wear; and correct operation to avoid damage.

A typical element of scheduled periodic maintenance is the replacing of oil, fuel, and air filters - and most fleet operations have that well in hand, Mead said. "Even though they have to call up and order those replacement parts, it's usually not an emergency," he said. Fleet maintenance shops often keep a service kit on the shelf, and Mead pointed out that some filters are common to other equipment as well.

The second aspect of maintaining a demolition machine, such as Asphalt Zipper's, is the monitoring of "wear parts," especially the carbide-tipped cutting tools.

"Normally, there is going to wear because of friction during contact with the ground, pavement and so on," Mead said. "Unlike periodic maintenance where parts replacement is somewhat predictable, wear of carbide bits depends how hard the material is that you're cutting."

Typically, the bits wear down at an even rate, especially when used in softer asphalt that is two or three inches deep," Mead said. In those circumstances, an operator can calculate what the wear rate is going to be. The bits may last through 40 hours of operation, Mead said.

However, "every road and every street is a little bit different," he cautioned. "You'll be going down the street and all of a sudden, you're in 10 inches of hard asphalt and your bits start to wear four and five times as fast as you had planned on. Or you get into a base that has a lot of rocks and you start to break bits."

If a fleet does not make a practice of stocking a large inventory of bits, Mead said, "then all of a sudden they can run out and the project grinds to a halt."

Fleets usually keep some backup bits on the shelf - but not always. "Many times we get panicked orders for those," Mead said, in which the caller announces, "I'm in the middle of a big job. The guys ran out of bits. I've got to have them tomorrow."

According to Mead, "These are carbide-tipped cutting tools. A box of them weighs 40 lbs. You start shipping those overnight by FedEx and you're looking at a $200 shipping charge for every box."

Nobody wants to incur that cost -- or the wrath that might come with it.

"The operator on the job is supposed to stop every once in a while to see how the bits are wearing," Mead said. Changing one bit takes about one minute, he said.

Finally, because the machine is a piece of demolition equipment pulverizing asphalt, there are many forces, stresses, and vibrations to account for.

When the machine starts tearing up asphalt, "it is a violent process," Mead said. Novices on their first training day tend to be surprised by that. "People involuntarily take one step back and say, 'I don't know about this.' They're very hesitant. But by the end of a week they're very confident with it and they know exactly what they're supposed to do with it. It becomes second nature." [PAGEBREAK]

People who haven't been trained have no business at the controls, Mead said.

If they don't operate it correctly, the forces, stresses, and vibrations can cause components to fail or result in structural damage. The best way to avoid that outcome is to strictly limit operation to crew members who have been properly trained, Mead said, which many fleets fail to do.

"I see that very, very often, especially with very large fleets," Mead said. Often, such a fleet will have a half-dozen crew members fully trained by the factory sales person to use the machine, he said. The next group of operators is trained by someone from the first group.

"Their training is something less; it doesn't have the same quality," Mead noted. And beyond that, there is often a breakdown of formal training that can lead to a breakdown of the machine. So-called "training" at that point might consist of little more than someone saying, "Here's the ignition key -- go for it," Mead said.

That method leads to damage that can be expensive, indeed. Mead described an incident last summer involving an owner of a new machine. The owner had multiple crews.

"One crew was trained to use the machine," Mead recalled. "They passed it on to another crew that had never had any training. They went out, and in a matter of hours destroyed the gear box, which is a $15,000 piece of equipment. The owner called me up and he was pretty irate." However, paperwork on file documented the individuals who had been trained, including signatures, Mead said.

According to Mead, he has arrived at the scene of a damaged machine more than once and asked, "How did this happen?" A frequent response is, "Oh, we didn't do that. It was the other crew." Mead noted, "No crew ever breaks an Asphalt Zipper -- it's always the other crew that did it."

He suggested an effective way to avoid such outcomes. Users that have one machine can assign responsibility for it to one person. When the machine is going to be used, that person goes with it, and makes sure it is used and serviced, by the book.