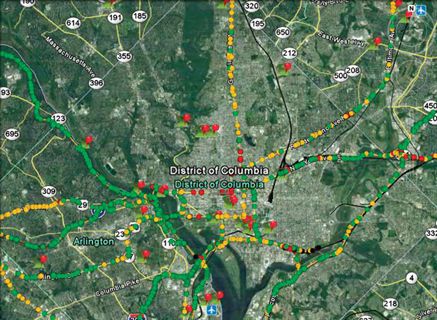 Google technology has made an impact in all types of industries globally over the last decade. Such technology can even help save lives when used by first responders (fire, police, and emergency medical services ­departments).

One of the nation's largest departments to take advantage of such technology is the Washington D.C. Fire and Emergency Medical Services (EMS) Department. For nearly two years, the department has used a Google-centric program incorporated with its own geographic information system (GIS) data to become more efficient, and in some cases, respond more quickly to incidents throughout the D.C. community.

"We use Google Earth Globe for supervisory mitigation and planning," Vlassopoulos said. "The tool basically helps us to be more efficient." It also serves as a customized version of Google Earth.

The information available to the Washington D.C. Fire & EMS Department is contained within the district's boundaries. It allows for secure review by qualified first responders and administrators using the District's protected intranet. The Google Earth Globe application also allows for information specific to fire/EMS, police, and emergency management departments.

"We have it set up where there is a layer that communicates information on all fire hydrants within the district," Vlassopoulos said. City staff can track hydrant information daily with the help of the Washington D.C. Water & Sewer Authority, and updates can be communicated through handheld devices and uploaded into the District's GIS. From there, it is incorporated by the OCTO GIS office into the Google Earth Globe program. "While live fire hydrant data is updated hourly, fire apparatus automatic vehicle locator data is updated every five minutes and we hope that even faster updates are likely in the near future.

"From a high level standpoint, we use Google Earth Globe to help us with situational analysis and to get updated information on critical infrastructure, such as  fire hydrants," Vlassopoulos said. "So once we have [fire units responding] on a scene, we can suggest a specific hydrant that has access to 3,000 or more gallons of water."

Additional layers Washington D.C. Fire & EMS has mapped through the Google Earth Globe program include electric substations, flood plains, and fire-related information and data. There is even a layer that has been added related to city shelters, which allows emergency response departments such as fire and police to better prepare for residential movement during a large storm.

"The information is being pushed into our GIS system and then pulled from GIS into the Google application," Vlassopoulos said. "And the information is available not just at command centers or stations, but because we have the laptops in all vehicles, we can view situational factors at a scene, such as which fire hydrants may be full and whether there may be technical issues at some of our electrical substations."

Though getting data into the system is relatively easy, one challenge is that it is not so easy to have the cartography and attribute information appear exactly the way the District's GIS department wants it to look, said Barney Krucoff, GIS manager for Washington D.C.

"Our traditional GIS tools give us more presentation options and we had worked out many of the cartographic ­issues," Krucoff said.[PAGEBREAK]

Perhaps the most important element to using Google is that it doesn't take someone with highly technical knowledge to use and view the data, Vlassopoulos said. As another example, Vlassopoulos said that a layer imported from GIS into Google Earth Globe can allow his colleagues to view available resources to help mitigate a fire while at the scene. Such information can be pinpointed by a "technological novice" within seconds.

Washington D.C. Fire & EMS has even used Google Earth Globe to help find and contact dialysis centers in the area during a large summer storm in 2008 that caused wide-spread power outages. This strategy helped the department to find residents who, in case of a power outage, might need electrical service to help ensure their health and dialysis needs were met.

"The best way that I can put it is that it is easy to use for the end user," Vlassopoulos said. "I'm a fireman myself and not an IT professional, but all I need to know how to do is click on a layer and I can pinpoint the type of information I am looking for.

"You can look at it this way - this process we use is so much better than pulling out a map and the files that go along with it," Vlassopoulos added. "It's a quick way to access data that is both timely and accurate."

The District's computer-aided design (CAD) is independent of Google, but the program serves as a support to CAD, Records Management, and other mapping technologies by providing more dynamic information. All fire and EMS personnel have access, from an incident command center post to first respondents to administrative offices.

As needs arise, Washington D.C.'s GIS office also works with Google to add important elements to the technology to meet customized needs. Earlier this year, the District's GIS department contacted Google to add a layer that allowed the department to view Washington D.C.'s snow plows in lieu of the major winter storms that have battered the east coast this winter. Once department officials and respondents could see the snow plows on Google Earth, they were better able to deploy resources to support the city's snow-battered residents and streets.

"We were very fortunate the District Department of Transportation (DDOT) has a snowplow tracking system," Krucoff said.

It is important to note that for the Google Earth Globe application to be effective, it requires close collaboration between various agencies in Washington D.C., Vlassopoulos said. The Fire and EMS Department, for example, doesn't manage the customized Google Globe data specific to the District's needs, but it does work with the District's GIS department to make sure it meets their needs. Washington D.C. Police is also involved in the process.

"You can't let political issues get in the way, and we have done a great job making sure there is the collaboration we need to get things done and efficiently share information," Vlassopoulos said.

In time, Vlassopoulos hopes that there may be additional data sharing with other nearby jurisdictions using Google Earth. Already Washington D.C. has worked to share mapping information with neighboring communities, such as Montgomery County, Prince George's County in Maryland, and Arlington County in Virginia.

And over the last several months, Vlassopoulos has been approached by a number of agencies across the nation that wanted to learn more about how Google Earth Globe can be implemented into their GIS. The interest particularly ramped up since the cable television station CNBC ran a segment in late 2009 about Google and how its technology has had a positive impact on Washington D.C.'s public safety departments.

"We field calls all the time and the story there is that if you can, using Google's tools can be a great addition," Vlassopoulos said. "The planning element and mitigating incidents is critical. It just helps to keep (public safety departments) more informed."