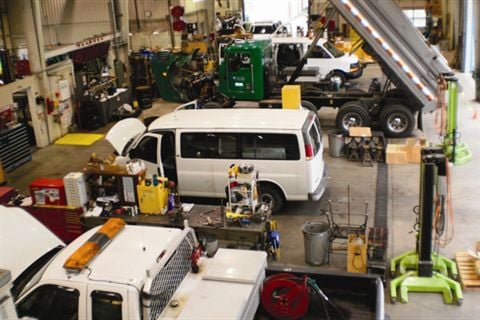 "Certification has given me the tools to perform my job in a professional manner," Kies says. "Whether managing fleet assets, maintaining the fleet, fuel management, or any of the many other functions required to keep a large fleet operating in top condition, certification programs challenge you to be your best. They also challenge me to stay up-to-date in my profession for my re-certification process every five years."

His ASE certifications, first earned while working in the private sector and for Monterey County, Calif., "served me very well, not only in securing gainful employment, but also in consideration for advancement to supervisory positions and eventually the fleet supervisor position," in 1996, Kies recalls.

Achieving a CAFM credential led to a fleet post with Pierce County in 1997 and promotion to Kies' current position in 2002.

Kies admits achieving and maintaining industry certifications "takes a lot of dedication. Like anything else, if you decide it is valuable, you will make the time."

While each certification program is a "self-paced" process, completion and testing generally takes 2-3 years, says Kies.

A mentor recommended NAFA's CAFM program when Kies determined he wanted to "move it up a notch" to the fleet management level. His progress toward CAFM certification began with a "rude awakening," Kies recalls.

"When I first signed up for the NAFA exam, I wondered, 'How hard could this really be?' So I took the test with minimal studying ... and failed miserably, passing only one of eight modules," he explains.

Realizing he had developed poor study habits, he completely "restructured what I did when I came home from work to set aside meaningful study time. I had to get away from my normal routine." On his next attempt, Kies passed every module of the course, which, at that time, included a case study project.[PAGEBREAK]

A CPFP certification was not required for Kies' Pierce County position. However, "since I work in a primarily public works environment, it seemed a natural fit," in keeping with his original interest of promoting professionalism in the fleet industry, he says.

The CPFP test presented its own challenge, says Kies. Through a registration mix-up, he never received study materials distributed to all other test-takers. He "carefully" took the exam anyway.

"Fortunately, being involved with educational programs both through NAFA chapter meetings and Public Fleet Managers Association, my local public fleet management association, had kept me up-to-date so I was able to pass the test regardless," says Kies.

In the public sector, Kies notes, some agencies now require professional certifications for employment, indicating the fleet industry "is starting to recognize the value of such achievements." Other fleets offer certification incentives or make participation available "to demonstrate their employees are professionals."

Some agencies also pay program costs, which can amount to several hundred dollars, according to Kies.

For Kies, industry credentials provide a measure of employment security. "Certification has given me confidence in knowing that I will always have a job, and if for some reason I should move out of the area, even in the current economic climate, I'd have a better-than-average chance of securing another great job in the profession that I love so much," he says.

Kies adamantly believes certification "shows dedication to the profession and increasingly is becoming the gauge by which professional fleet managers are measured."

While he's "had the privilege to know outstanding fleet managers who are not certified, I also know many certified fleet managers, and they are, in my opinion, without question, the very best of the best."