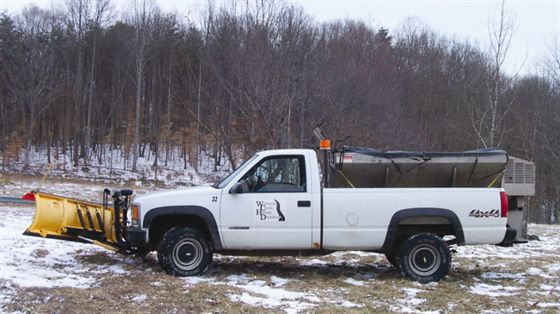 With more than 800 miles of sprawling rural highways to maintain and 24 pickup trucks on the road, Washington County, Tenn., Highway Department driver locations can be difficult to pinpoint at any given time.

With such a vast territory to cover, John Deakins Jr., the County's highway superintendent, found it difficult to manage employees in the field. At times, he needed to locate and deploy the nearest worker to a critical job. At others, Deakins was concerned about speeding or personal use of county vehicles. And sometimes, a worker was off route or simply taking a long lunch. With reports of vehicle misuse and a desire for better access to his drivers, Deakins sought a solution: GPS tracking units.

"We saw a lot of abuse and reports of county vehicle misuse. I went online one day and researched GPS tracking devices," he said. "When you've got that much territory, it helps to have these devices."

Deakins then monitors activity, whether live or historical, via the Web, and generates reports based on his chosen metrics. Data is updated every five minutes. These reports help continually track fleet activity without dedicating a full-time resource to the job.

"We generate reports because we don't have someone sitting in front of the computer watching all the time," he said. "If I'm in Nashville, I can get on my laptop and can see where folks are." Collecting this data helped Deakins resolve several fleet issues, such as reducing vehicle misuse, boosting employee productivity, and improving emergency vehicle response time.

Before employing GPS, Deakins heard several accounts of county vehicle misuse, motivating him to research and purchase the telematics units. Once installed, vehicle misuse was visible even though employees were aware of the devices.

Deakins recalled one driver who was allowed to drive his company truck only to and from work each day. He was using the vehicle before and after work for personal trips, totaling roughly 12 miles per day of misuse. "These trucks average about 11-12 miles per gallon. The cost in fuel alone adds up quickly," Deakins said.

In addition to personal use outside work hours, Deakins said there were instances of typical issues many fleets deal with, such as long lunch breaks and unauthorized time off during work hours.

Deakins can now monitor a driver's exact location within roughly 10-15 feet. He also set speed limits for fleet trucks and receives alerts each time a driver exceeds that limit. Doing so not only promotes safer driving, but reduces fuel consumption as well.[PAGEBREAK]

Once Deakins saw the power of GPS units in curbing vehicle misuse, he realized they could also be used to boost productivity. As County employees use boom mowers to maintain the roadside, GPS units are installed in pickup trucks that follow the tractors, allowing Deakins to monitor the boom mower's progress. "We can tell where they've started and ended each day and how much they've done," he said.

In addition to units installed in fleet trucks, the County purchased four handheld GPS devices in 2009. These have proven beneficial as well, according to Deakins.

Following a mandate calling for highly reflective safety and directional road signs, Deakins' crew performed inventory and replaced potentially more than 10,000 signs across the county. He assigned three crews of two employees to evaluate and measure each sign, making certain it was the correct distance from the pavement and served its purpose for drivers.

Requiring workers to carry a handheld GPS unit, which provided locations within just a few feet, Deakins followed workers on routes via the Web as they inventoried the signs.

"We could monitor how much they were getting done," he said. "We had one crew that wasn't getting out of the truck. We knew that was the case because they had incorrect sizes on the signs, and we could see how fast they were moving down the road. We made them go back and run the route again."

In this instance, GPS not only made Deakins' crew more productive, but also ultimately resulted in safer driving conditions for county drivers.

With hundreds of miles of road to tend, GPS also assists the county during emergencies. Where previously Deakins might not have known a driver's location or who was closest to a critical situation, he can now route units based on job proximity.

"One benefit we used especially this year was tracking trucks on routes pushing snow. If we have an emergency, that's who we call first, and we can see which one is closest to where it's needed," he said.

In the past, Deakins also dealt with vehicle theft. Fortunately, no units have been stolen since the County installed the GPS units. However, he noted the units' value if the situation arises again.

"We've had equipment stolen before these were available. If we had the [GPS] device, we could have identified where it was. If you have a piece of equipment that costs several thousand dollars, spending a few hundred on a GPS device seems like a small price to pay to get it back."

In just two years of use, Washington County reaped the benefits of the GPS investment. Where employees took unauthorized time off in trucks during the day, or used them for personal reasons outside of work hours, abuse has been curtailed. In addition to reducing abuse through use of speeding alerts and idling reports, fleet is safer and more energy efficient, according to Deakins. All measures have resulted in lower county fuel expenditures and a more capable fleet, not to mention safer roads for Washington county citizens.

Overall, Deakins said the units have been easy to install, requiring little effort in transitioning to GPS tracking. He said the biggest hurdle was dealing with driver opposition to using the units.

"Some drivers felt like it was an intrusion, but since it's a county vehicle, it's our duty to manage that vehicle," he said. "Any time you change anything, there will be some resistance. After a few months they got used to them and don't worry about it anymore. It's a very easy solution; it's something that you just need to explain to your employees as to why you're doing it. After that, everything goes pretty smoothly."

Despite driver resistance, Deakins said the department saw additional benefits beyond that small drawback and the units have already paid for themselves.

"At the time we got them, gas was almost $5 a gallon," he said. "When you run 24 vehicles and have nine people driving them home at night, cutting down on misuse, long lunches, and personal use pays for the units in the first 12 months."

Deakins said the GPS units have essentially resolved the problem of misuse.

"You have some problems pop up every once in a while, but 99 percent of it is gone," he said. "We don't want to be 'Big Brother' watching; however, we are spending taxpayers' money, so we're accountable for that."

For fleet managers looking to deploy GPS in their operations, he offered a few words of advice.

"I would check with your insurance company to see what you need to do to get a discount. Then, go to the companies and say, 'This is what our insurance company recommends' and get prices,' " he said. "There are so many types [of equipment], you can do just about anything you want with them. It really depends on how much you want to manage your fleet."