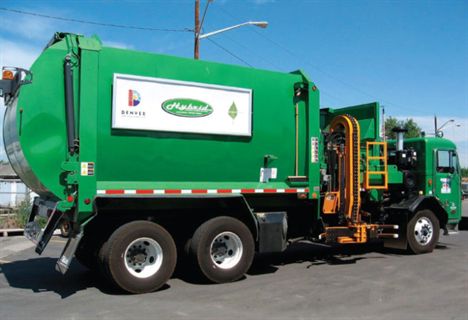 Ranked No. 9 Government Green Fleet in North America by the 100 Best Fleets organization, the Denver Public Works Fleet Maintenance Division is always on the lookout for green technologies. The latest addition to its ever-expanding green fleet now includes a hybrid-hydraulic trash truck.

Including the safety division, the City and County of Denver operate 2,820 vehicles, including 143 hybrids. "Currently 5 percent of the fleet is hybrid," said Nancy Kuhn, fleet administrator for the Public Works Fleet Maintenance Division.

In 2001, the agency bought a fleet of 39 Toyota Prius hybrid-electric vehicles, making it one of the world’s largest municipal hybrid fleets at the time. In 2005, the agency secured three Ford Escape Hybrids, among the first to roll off the assembly lines, and one of which is driven by Denver Mayor John Hickenlooper.

Promoters of alternative fuels, the City and County of Denver started using biodiesel in 2004. All diesel units now run on cleaner-burning biodiesel fuel.

The new Peterbilt Model 320 HLA hybrid-hydraulic unit is one of 115 trash trucks employed in daily trash collection. "The truck is getting 25-percent better fuel economy than its non-hybrid counterparts," said Kuhn. "We anticipate an annual reduction in excess of 1,600 gallons of fuel compared to our non-hybrid fleet of similar vehicles." 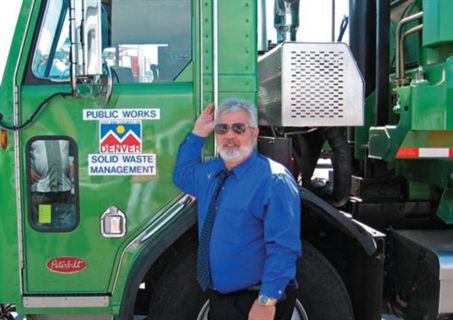 In 2006, Public Works fleet managers saw the hybrid-hydraulic trash truck at the Hybrid Truck Users Forum/CALSTART Conference in San Diego. "Our local Peterbilt representative informed us the manufacturer was looking for an additional site to test the vehicle (outside of Texas), to evaluate the unit in cold weather and high altitude conditions," said Kuhn. "It was at that gathering that an agreement to test the truck in Denver was negotiated."

The decision was mutually beneficial, as the City was due to replace a trash truck in 2008. Rather than replacing the old unit with a traditional truck, the City purchased the Peterbilt Model 320 HLA. The unit, which went into service mid-August 2008, is one of about a dozen being tested by the manufacturer. Denver’s unit is the only one operating outside of Texas.

The city’s collective fleet of refuse trucks travel an average of 8,400 miles annually and achieve about 2.3 miles per gallon. With unpredictable fuel prices, Denver welcomed the opportunity for cost savings within its heavy-duty truck fleet.

In addition to saving money, Denver’s emissions reductions with the new heavy-duty hybrid trash truck falls in line with a goal strongly supported by Mayor Hickenlooper’s Greenprint Denver initiative. "If the unit is burning less diesel fuel, it will be emitting fewer harmful emissions," said Kuhn. "The manufacturers say the unit reduces emissions of NOx, particulates, and CO2."

Kuhn added, "We anticipate longer brake life, as the hybrid technology is used to help brake the unit."

Taking out the Trash Truck 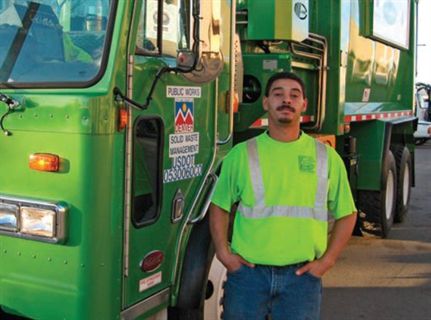 The unit operates differently from a conventional truck, said Kuhn. "The driver can use the hybrid technology to control starting and braking during stop-and-go trash operations. Not only are we getting better fuel economy, we expect the brakes to last longer."

The operator for the hybrid-hydraulic trash truck, "hand-picked to operate the hybrid, has a history of being a good, dependable driver who keeps his vehicles clean and well-maintained," she said.

Thomas Valdez takes pride and ownership in his hybrid. "[He’s] happy with the truck and likes driving it," Kuhn said.

Though Valdez received training on the unit’s operation, not a significant amount was required. Fleet mechanics also received training in maintaining/repairing the hybrid. Valdez is currently helping train another driver on how to operate the unit.