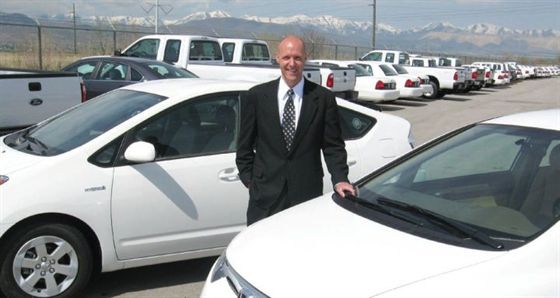 The State of Utah’s Division of Fleet and Surplus Services works proactively to ensure a smooth and cost-effective fleet organization. From fueling infrastructure to vehicle surplus to risk management, the division staff is on top of fleet policy at every turn.

According to Scott Bingham, research analyst, division of fleet operations, the State prides itself on being proactive and conscientious of each fleet segment.

"We are constantly trying to ensure that our state will become more efficient and effective with state dollars by becoming more cost efficient through such initiatives as lowering our drivers’ risk, contributing to a greener environment, and implementing energy-efficient measures," Bingham said.

As a research analyst, Bingham analyzes information from the State’s databases, its FleetFocus fleet management system, and trade magazines. His goal is to come up with the best way for the fleet to operate most efficiently using state funds and taxes.

The State’s 4,528 vehicles — typically replaced at 90,000 miles or six years — are driven across the state by police, health officials, human services, the department of transportation, and many more agencies.

Day-to-day vehicle management is handled by 14 of the 38 fleet and surplus services employees. State-owned vehicles include various models, such as the Impala, Cavalier, Caravan, Taurus, Focus, Crown Victoria, and half-ton pickups.

"Our legislative subcommittee has given us the go-ahead to order more hybrids so that our fleet can become more fuel efficient," Bingham said, who has been with the State for five years.

"Conducting weekly drivers’ license checks are critical to the management of the State’s fleet because it dramatically minimizes our risk," Bingham said. "If we have a big accident, it could cost us millions in litigation and payouts. And, of course, there is the possible loss of life that can’t be quantified."

A working partnership with the Driver’s License Division in the Department of Public Safety allows a single member of the State’s fleet staff to verify the driver’s license status of every driver in the State’s database of vehicle operators.

A 15- to 20-minute program allows the staff member to update all license checks each Monday.

The State’s risk assessment program takes into account points and infractions and calculates the level of risk. The license checks help facilitate this process.

The program also allows management to drill down to a more detailed look at the types of infractions occurring. If the infraction has been defined as one the agency sees necessary to take action upon, the agency can then move in that direction.

And the fleet department’s new stringent accident reporting method will soon allow management to drill down even further.

"Our more stringent accident reporting was put together when we came to the realization that not all accidents were reported," Bingham said.

All accidents, whether damage is incurred or not, are entered into the State’s databases. Online reports allow agency fleet managers the ability to find specific accidents or operators who have caused multiple accidents, and address the situation as necessary.

The State has 34,000 active operators. Of those drivers’ licenses, the weekly license check reveals 0.75 percent are invalid, an improvement over the 1.5 percent that were previously returned as invalid.

"Fleet operations relies on accurate information in our databases, and, as such, it is imperative driver’s license information be as clean as possible," Bingham said. "Our efforts to verify each license has contributed to the decrease in this number."

To date, Bingham has found that most license come back as invalid because the driver has forgotten the expiration date has just passed. In these cases, the solution is simple: the driver renews the license.

However, when something more serious is found, such as a DUI or excessive points, the State’s fleet management system notifies the driver and his or her supervisor, who determines the appropriate disciplinary action.

The fleet department is now working with the Motor Vehicle Review Committee (MVRC) — comprised of representatives from the State’s major fleet customers — to create definitive rules around disciplinary actions.

"We are currently working with the MVRC to have each infraction categorized and defined, but as of the present time, we have no criteria that would not allow a driver to operate a state vehicle other than an invalid license," Bingham said.

The MVRC is another tool the fleet department uses to understand what their customers need.

"With this initiative, we should be able to bring the risk level of the State down even further," Bingham said.

Another factor helping to keep risk level down is minimizing incorrect data input into the State’s fleet management system, which has created a snowball effect in the past.

"If you have an incorrect driver name or license number, it creates all sorts of problems," Bingham said. "With this program, we’ve been able to gain consistent, concise, and correct data."

The State will even customize classes for agencies that need help in their defense driving or their large van driving.

"We’re in Northern part of the state, but we will actually drive to the agency to take care of their fleet training needs and requirements," Bingham said. "We’re really dedicated to bringing the risk down in the state-wide fleet."

Other Measures in the Works to Help Keep Costs Low

Still in the research phase, the State could begin implementing its new cycle in about two years.

Another State fleet best practice involves Web reporting, which allows agencies to look at their cost per mile, miles per gallon, total mileage, and repair history for each vehicle.

"We can also look at total fleet statistics and makeup, accident statistics by type and driver, gas card exceptions, and alternative-fuel usage. We also want to encourage and entice agencies to use alternative fuels," Bingham said. "So our reports break down the type and amount of fuel being used."