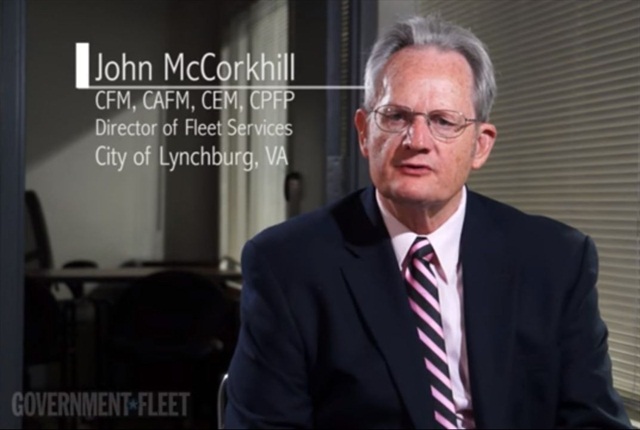 In Government Fleet’s Knowledge Sharing video series, John McCorkhill, CAFM, CFM, CEM, CPFP, retired fleet director previously working for the City of Lynchburg, Va., talks about the importance of networking, being a leader rather than a boss, and the difficulty of finding good technicians.

McCorkhill has been in fleet management for 33 years, working at the City of Indianapolis before joining the City of Lynchburg more than 16 years ago. His biggest accomplishment was leading the Indianapolis fleet team to victory when it bid against the private sector for the management of the city’s 3,000 vehicles. Other accomplishments include mentoring other fleet professionals who have become successful, accomplished fleet managers; being named the Public Sector Fleet Manager of the Year; and earning four fleet certifications.

He was inducted into the Public Fleet Hall of Fame in 2014 and was a judge of the Leading Fleets award in 2015.

At Lynchburg, McCorkhill managed 940 fleet assets. He retired in October 2015.

Government Fleet continues its Knowledge Sharing video series featuring veteran fleet managers sharing advice and tips for new fleet managers. This series was created to address the “graying” of the industry and to allow experienced fleet managers to pass along their industry knowledge.