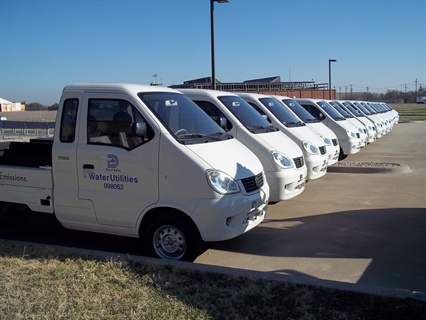 DALLAS – The City of Dallas marked Earth day earlier this month by unveiling 24 electric vehicles it has added to the City fleet. The vehicles were purchased with a Department of Energy grant facilitated by the North Central Texas Council of Governments. TXU Energy is also adding to Dallas’ clean fleet by donating a Chevy Volt electric vehicle to the City in May as part of their Brighten GreenBack program.

The electric vehicles are part of the City’s ongoing commitment to reducing vehicle air emissions and fuel consumption. At nearly 40 percent, Dallas has one of the largest alternative fueled fleets in Texas, according to the City.

The City of Dallas said its commitment to energy efficiency and cost savings is also paying off. TXU Energy will present the City with a $234,000 rebate as part of the Brighten GreenBack program, which allows cities and businesses to earn money for making environmentally responsible changes. The City of Dallas signed a new contract with TXU Energy last August, which is expected to save the City more than $7 million annually in electricity costs.

The North Central Texas Council of Governments and TXU Energy are supporting the City’s goals of increasing the use of cleaner alternative fueled vehicles and energy efficiency, the City’s news release stated. 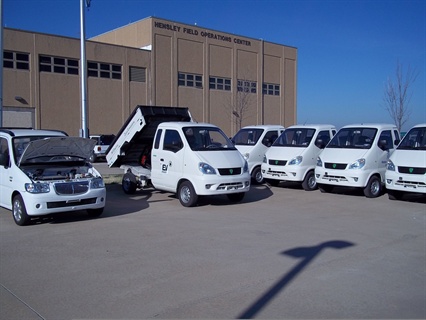 The company that sold the vehicles to the City is EV Autos Texas, which started in Austin as a storefront retail franchise electric car dealership in 2007, the company stated. The vehicles purchased are Miles ZX40ST trucks. The Miles EV has a max speed of 25 mph and legal for street use on streets with a max posted speed of 35 mph.

The company said battery life average is 25,000 miles, which is about 3.3 years of use. Each vehicle has a full metal body on a steel frame.  These vehicles are safety tested, since they are standard highway speed vehicles in Asia and Europe with gas and diesel engines according to the company. The company added that the Miles ZX40ST exceeds the requirements of the NHTSA Standard 500 Regulation. The company estimates that the cost of operating a Miles ZX40ST Truck is $0.0759 per mile.