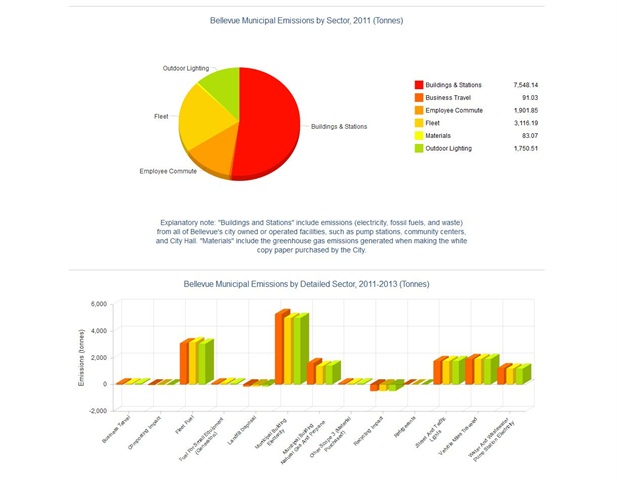 The City of Bellevue, Wash., worked with an area company to develop a new online, Web-based “dashboard” that shows the City’s progress toward meeting its greenhouse gas reduction goals. The City developed these goals as part of its Environmental Stewardship Initiative. An area company called Scope 5 developed the dashboard. The City stated it purchase the software using American Recovery and Reinvestment Act grant funding.

The City set its original targets in 2007 and the dashboard tracks emissions from all City departments, including emissions associated with fleet vehicles, buildings, and other operations. It also shows non-City-government emissions from the community in general. The data shown is compared to a 2006 baseline. The emissions-related goals were established as part of the U.S. Mayors Climate Protection Agreement, which set out to reduce greenhouse gas emissions to 7% less than 1990 levels by 2012. Bellevue stated that more than 1,000 U.S. cities signed on to this agreement.

The City said it has replaced 90 vehicles in its fleet with hybrid models over the last three years and implemented a program at City Hall that reduced energy use by 22% compared with 2009 levels.