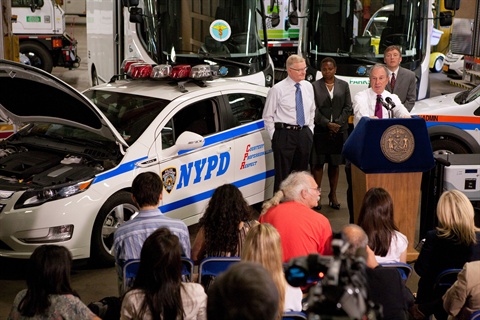 NEW YORK CITY – New York City is adding 70 electric vehicles to its fleet, which brings its total fleet of EVs to 430, according to a news release from the City. The City’s new EVs include 50 new “extended range” Chevrolet Volts, 10 Ford Transit Connect Electric vans, and 10 electric Navistar eStar utility trucks.

You can see a photo gallery of the event and the City's new Chevrolet Volts here.

This addition of electric vehicles to the City’s fleet is part of a City program to provide New Yorkers with more information about these vehicles. Funding for the EV program came from a partnership with the New York State Power Authority and from the U.S. Department of Transportation. Each funded part of the difference in cost between the purchase of an EV and a gasoline-powered vehicle. In addition, the U.S. Department of Energy provided a grant to Coulomb Technologies for EV charging stations installed in the City.

“I’m very proud that DCAS enabled acquisition of these 70 vehicles by coordinating grant funding from the U.S. Department of Energy and the New York Power Authority,” said DCAS Commissioner Edna Wells Handy. “While New York City is already a leader in this area, boasting the largest clean-fuel municipal fleet in the country – emissions from these 70 electric vehicles are 75 percent cleaner than internal combustion engine vehicles. In addition to obtaining the funding for this initiative, DCAS teams shepherded the contracting, procurement and placement of the Volts, electric Transit Connects, and eStart vehicles in recipient agencies.”

A number of City agencies will be using these vehicles, including the following:

In addition, the FDNY and NYPD initially will use the vehicles for non-emergency duties, including use by NYPD Traffic Enforcement Agents, according to the City.