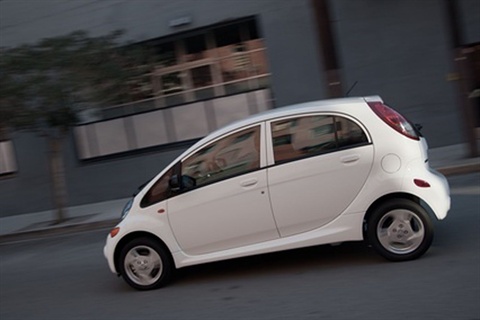 CYPRESS, CA – The City of Cypress will purchase two to three Mitsubishi i all-electric vehicles, along with two to three charging stations, said Council/Agency Board Member Doug Bailey. The announcement was made July 7 at the Mitsubishi Motors North America (MMNA) corporate headquarter in Cypress, where the auto maker unveiled a new solar-powered EV charging station.

According to Doug Dancs, City of Cypress director of public works/city engineer, the Mtsubishi i will be initially used in the municipal motor pool, with possible later use as parking enforcement vehicles. The municipal fleet already has two all-electric GEM vehicles in operation. In addition, the City of Cypress fleet has had a strong commitment to propane-powered vehicles, which started in 1980. Currently, the propane-powered portion of the municipal fleet is comprised of two street sweepers, one water truck, two forklifts, and a light tower. The City has on order two propane-powered light-duty pickups.

At the July 7 press conference MMNA unveiled the charging station, which is powered by 96, 175W photovoltaic modules from Mitsubishi Electric. The company said the station can charge up to four vehicles at once and features three different types of chargers, each with a different voltage level. The charger types include the standard level 1 voltage (110v), which can deliver a 100-percent charge in 22 hours on the new Mitsubishi i, according to the company; the level 2 (220v,) which can charge this vehicle in seven hours; and level 3 CHAdeMO Quick Charger, which can charge the i to 80-percent battery capacity in under 30 minutes.

The DC Quick Charger used for the Cypress charging station is manufactured by the Eaton Corporation, and is the first-of-its-kind CHAdeMO Quick Charger certified for U.S. sale and public utility. The actual installation of the charging equipment and the supporting electrical infrastructure was handled by Rogers Electric. The twin-arch structure for the charging station was designed by California Green Designs.

In a related news release, the i received an EPA-rated MPGe rating of 126 city and 99 highway, 112 MPGe combined. The EPA also gave the new i a “real-world” (i.e. tested under more aggressive driving conditions) driving range of 62 miles.

The EPA also rated the i at an LA4 driving range of 98 miles. The LA4 driving cycle test involves a driving distance of 7.5 miles and includes stops along the way. This test is designed to mimic city driving conditions with numerous starts and stops.

Updated: We corrected the charge time for the CHAdeMO Quick Charger, updating it from a 6-hour to a 7-hour charging period, and to a 30-minute quick charge period.