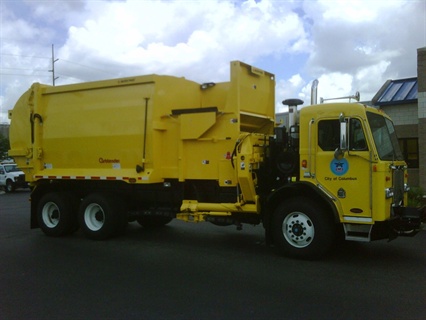 COLUMBUS, OHIO - Columbus will be putting four Hydraulic Launch Assist (HLA) refuse side loader trucks into service by July 1 to replace older side-loader vehicles, making the City of Columbus is the first city in Ohio to own and operate a type of hybrid refuse truck, according to a release from the City. The Eaton HLA system recovers the majority of energy normally wasted as heat during braking and uses it to supplement the engine's power during acceleration, making it ideal for vehicles like refuse trucks that do a lot of stop-and-go driving.

"I am proud of the strides we have made in making our fleet one of the greenest in America," Mayor Michael B. Coleman said. "With these hybrid trucks, we will reduce air pollution and save money on fuel and maintenance costs."

The HLA system has been shown to increase fuel economy by up to 25 percent as well as reduce emissions of NOx, particulates, and CO2, which are air pollutants that contribute to air quality alert days and climate change, according to the release. The hybrid configuration also provides more torque for quicker acceleration and shorter cycle times. The City also anticipates an improvement of up to 300 percent in brake life because the HLA system recovers and stores most of the energy usually absorbed by the brakes.

"We anticipate an annual reduction of up to 5,500 gallons of fuel from these four trucks compared to our non-hybrid side loader trucks," said Columbus Fleet Administrator Kelly Reagan.

The HLA trucks are part of Mayor Coleman's Get Green Columbus Initiative and reflect the goals of his Green Fleet Action Plan, which has specific targets to reduce overall fuel use and increase the number of green vehicles that are purchased for the City's fleet. The City of Columbus was ranked as the 7th greenest fleet in the country by the 100 Best Fleets program in 2010.

"The overall cost of operating these trucks combined with their lower environmental impact make them an ideal investment for Columbus," said Priscilla R. Tyson, chair of the Finance Committee. "And because we are using a significant amount of grant money to purchase the trucks, we are doing so at a savings for our residents."

The HLA trucks are funded in part by the Department of Energy Clean Cities grant, which funds 75 percent of the cost of the hybrid option. The Clean Cities grant is administered locally by Clean Fuels Ohio, a statewide non-profit organization dedicated to promoting the use of cleaner, domestic fuels and efficient vehicles.  The trucks are manufactured by the Eaton Corporation, headquartered in Cleveland.