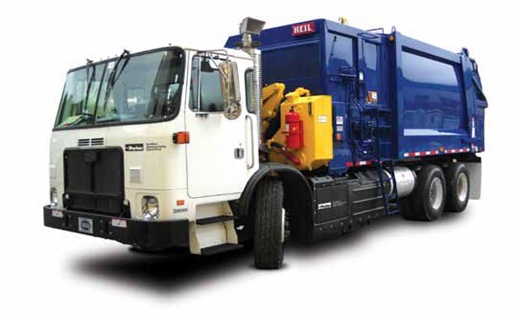 CLEVELAND, OH – A number of cities and counties are testing hydraulic hybrid technology in refuse trucks and have reported significant fuel savings. So far, the Cities of Hialeah, Hawaii, Miami, and Miami-Dade County have purchased a total of 11 refuse trucks that use this technology.

According to a release from Parker Hannifin Corp, a company that has developed a version of this new technology, which it calls RunWise, has been placed on the EPA’s National Clean Diesel Campaign's Emerging Technologies List. The company developed and tested the technology with support from the EPA at its National Vehicle and Fuel Emissions Laboratory in Ann Arbor, Mich. Chrysler has also partnered with EPA to develop a version of this technology for light-duty vehicles.

"What we are seeing right now is a 45 percent fuel reduction,” stated Danny Diaz, director of fleet management for Miami Dade County, which purchased six Autocar E3 refuse vehicles equipped with the RunWise technology. “With automated garbage trucks in this type of stop and go application, the fuel economy is typically very poor on a traditional vehicle. The savings we are seeing is significant when you look at the long-term with these hybrid trucks and the uptime has been running at very high levels."

Parker stated its RunWise Advanced Series Hybrid Drive is designed to recover up to 70 percent of the energy lost during braking to power the vehicle. The company said it uses a two-speed hydrostatic drive, combined with a mechanical direct drive, which allows the vehicle to optimize performance at low and high speeds. Parker said UPS and Fed Ex have ordered a variation on the technology for use on delivery vehicles scheduled to be on the road in 2011.