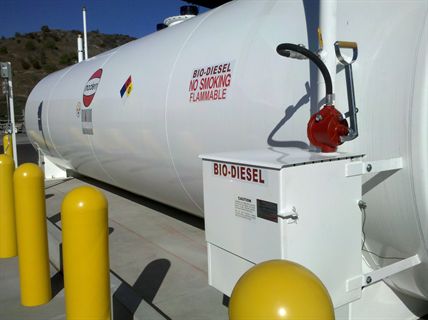 The City completed construction of the above-ground fuel tank in October 2010, and it began using the tank in mid-November, after compliance testing, according to Steve Dorsey, fleet manager.

"Before, we had two small tanks that held 1,500 gallons total," Dorsey said. "We needed fuel drops every day." The larger fuel capacity of the new tank allows the City to refuel about every two months.

While the cost of the biodiesel is slightly higher, Dorsey said not needing tank refueling every day has lowered costs slightly so that fuel cost is almost exactly equal.

The biodiesel is derived from used cooking oil collected from local restaurants, said Brendan Reed, environmental resource manager for the City. The City partners with a third-party vendor that collects the oil.