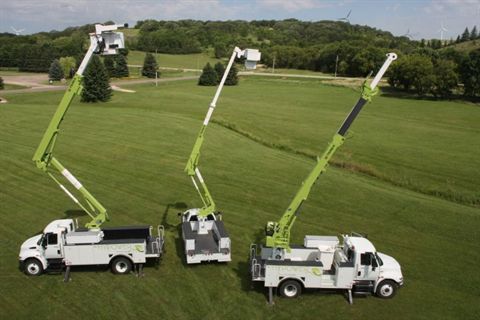 WATERTOWN, SD - The California Energy Commission (CEC) recently announced approval of nearly $500,000 in funds for a California Terex HyPower Hybrid retrofit project. The project, scheduled to be completed in January 2012, will retrofit 12 medium- and heavy-duty utility service vehicles with the Terex HyPower Hybrid System. The HyPower technology can significantly reduce vehicle fuel consumption, lower engine emissions, and minimize noise pollution when installed on utility service vehicles, according to a release issued by Terex.

In collaboration with Pacific Gas & Electric (PG&E) and CALSTART, the Terex HyPower Hybrid Project is aligned with the goals of the CEC AB 118 program, which seeks to advance medium- and heavy-duty vehicle technologies in order to significantly reduce the demand for petroleum fuels and greenhouse gas emissions. The goal of this project is to demonstrate that vehicle fleets can transition to the HyPower Hybrid technology at a faster rate and with a much lower initial capital investment by retrofitting existing service vehicles rather than purchasing new ones.

"We are pleased to partner with the CEC, PG&E, and CALSTART to move forward with the Terex HyPower Hybrid Project," said Joe Caywood, marketing manager, Terex Utilities. "This retrofit project will make a significant impact in 'greening' service vehicle fleets quickly and efficiently."

"With the HyPower Hybrid System, Terex has not only paved the way for utility companies to 'green' their service vehicle fleets, but we've also created a technology that is easily transferrable to a vast number of other vehicles that operate auxiliary devices using standard power take-off (PTO)," says Caywood. "Hydraulically operated devices that use this technology could include garbage compactors on sanitation vehicles, winches on tow trucks, and lifts on delivery trucks."

The CEC grant for the Terex HyPower Hybrid Project matches an additional $2.4 million in private funds and in-kind contributions from PG&E and Terex.

Click here for more information about the CEC AB 118 program.

About CALSTART
HVIP is one of several projects operated by CALSTART, North America's leading clean transportation technologies and solutions consortium. One key focus area for CALSTART has been the market introduction of clean, low-carbon solutions in medium and heavy-duty vehicles. CALSTART is a member-supported organization of more than 140 firms, fleets and agencies worldwide dedicated to supporting a growing high-tech, clean transportation industry that cleans the air, creates jobs, cuts imported oil and reduces global warming emissions.