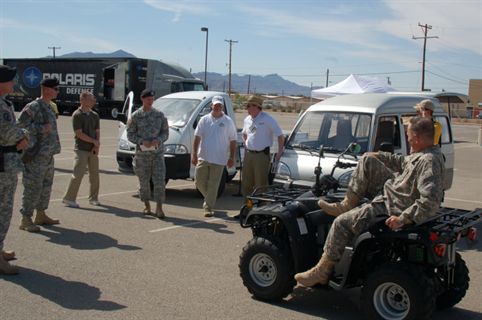 ZAP demonstrated its ZAPTRUCK XL with convertible bed for moving up to 1900 lbs. of cargo, ZAPVAN SHUTTLE for transporting up to four passengers or allowing easy side loading through sliding doors, and the ZAP DUDE ATV, suitable for installation security patrol and maintenance functions.

ZAP said the U.S. Army reordered ZAP electric trucks last year after a successful introduction of the vehicles at the Army's Daegu, Korea installation. Former environmental division chief, Robert Chartier, personally created an initiative there to bring the electric trucks on base as part of an environmental awareness program that earned him the highest individual environmental award for 2009 from the Secretary of the Army Environmental Awards Program, according to the manufacturer.