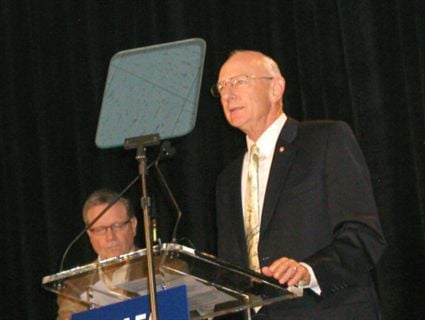 DETROIT - John Alley, CAFM, deputy director, fleet services for the City of San Diego, was named Government Fleet's 2010 Public Sector Fleet Manager of the Year at an awards presentation April 25 at the NAFA Institute & Expo.
Sponsored by ARI and Fleet Counselor Services, the annual award recognizes the best in public sector fleet management.
Alley was one of three finalists narrowed down from 24 nominees for this year's award. Hillsborough County's Sharon Subadan and City of Fort Wayne's Larry Campbell were the other finalists up for the 2010 title. All three nominees were introduced by Eric Bearly, GF associate publisher, who then called on stage ARI's Ed Pierce to announce the award winner.
Grateful to all the individuals who helped him achieve the prestigious recognition, among those Alley thanked in his acceptance speech were his staff, colleagues, and upper management at the City of San Diego, as well as his wife of 45 years, Betty.
"Managers ensure things get done right, leaders ensure the right things get done, but teams accomplish all things with integrity together. Team, for me, stands for 'Together Everyone Accomplishes More,' " Alley said. "Even though it's an individual recognized for the award, it's a team effort. The people who work for me are the reason WE - not John - receive this award."
Among his notable 2009 accomplishments, Alley helped save the City nearly $12 million through a fleet reduction program that reduced underutilized and obsolete fleet vehicles by more than 300 units. More on Alley's award-winning fleet practices will be featured in an upcoming issue of GF.
Click here to view all 2010 Public Sector Fleet Manager of the Year nominees.
Read more about Fleet Manager Awards City Fleets