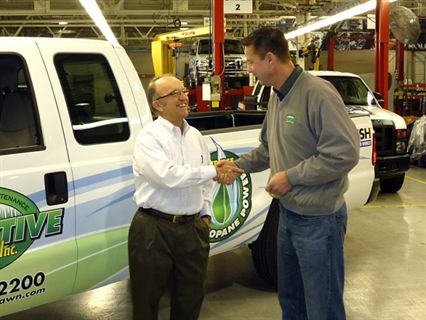 "We've been waiting three-quarters of a year for this day and now it has come to fruition," said Eric Hansen, president of Competitive Lawn Service, Inc. The key handoff took place at the ROUSH Performance Vehicle Assembly Area in Livonia, Mich., where the trucks are converted to run on propane.

Hansen plans to convert the other trucks in his Downers Grove, Ill.-based fleet to ROUSH propane F-350s, which he expects will result in a considerable savings for his business.

"A down-and-dirty number would be a savings of around $800 per truck each month," he explained. "With all the lawn care equipment added in, we could be saving $2,500 per month per truck. I'm looking forward to proving that out over the next several months."

Hansen said he had been looking for a propane truck that offered an under-bed tank because the company's work required a full, eight-foot bed capacity. "ROUSH was the only company we found that offered this option," he explained, adding that it operates exactly the same as a gasoline-powered F-350.