SILVER CITY, NM - Silver City has added two new $17,900 Mile Electric Vehicles to its fleet for use by its meter department and expects to quickly recoup that expense in fuel savings, according to the Silver City-Sun News. 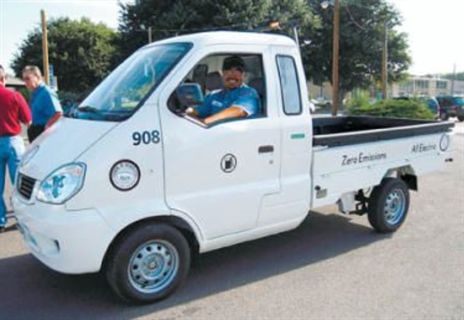 The mini trucks were tested in town back in June to see how they would operate on the city's hilly streets, reported the Sun News.

Ves Grimes, foreman for the town's meter department, said the vehicles cost approximately .03 to .06 cents in electricity to operate, with the .06 cents including battery replacement.

The vehicles can go 25 miles on a charge, Grimes said, or up to 77 miles on completely flat terrain - requiring just a fraction over $1 worth of electricity to charge the vehicle from a completely drained battery, said Grimes. The vehicles are limited to 25 miles an hour and cannot drive on streets where the posted speed limit is higher than 35 miles per hour.

Silver City meter readers drive about 24,000 miles a year, said Town Manager Alex Brown. The cost to maintain and operate the electric vehicles will save the town money over the years. Brown said the lifecycle of town vehicles is about seven years, Brown said.

All work on the vehicles can be done by town employees, and Miles Electric Vehicles will reimburse Silver City for work done while the vehicles are under warranty, reported the Sun News.