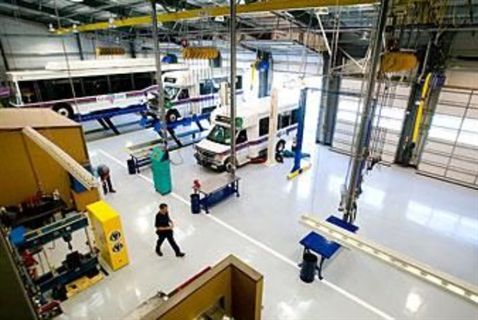 LODI, CA – The City of Lodi spent $3.4 million on its new 14,500 sq.-ft. vehicle maintenance shop, which has an additional 3,000 sq.-ft. of storage, according to the Lodi-News Sentinel. The shop, which took eight months to complete, can hold up to four small vehicles and four large vehicles such as buses or fire trucks for repair and service.

Mechanics broke the building in May 19 by putting the city's buses, fire trucks, and other vehicles on lifts to perform scheduled maintenance and to repair broken parts.

The city services 430 of its own vehicles in the brand new shop, which is three times the size of the previous building, said Dennis Callahan, the city's fleet and facilities manager, according to the Lodi-News Sentinel. It also has a tire repair area, welding and parts rooms, office space, and Americans with Disabilities Act-compliant bathroom and locker rooms. In addition to extra storage space, the shop also provides heated floors to keep mechanics warm in the winter, and has the city's first bioswail, which collects all of the storm drainage water to let it absorb into the ground.

The city used $1.85 million in state grant money from the Public Transit Account and other state and city funds to pay for the new shop, said city officials, reported the Lodi-News Sentinel.