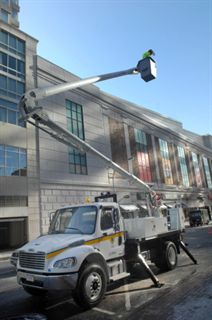 The City of White Plains, in partnership with the New York Power Authority, has purchased the innovative heavy duty vehicle, equipped with an aerial bucket body, to be assigned to the City's Public Works Department.

The truck will be used for caring for the 20,000 trees that the city maintains on streets and in parks.

The City of White Plains has had a longstanding history of research and demonstration programming for alternate fuels. "This vehicle is another step closer towards our shared goals of a cleaner city. I would like to thank the New York Power Authority for their continued partnership with the City of White Plains. In terms of green technology, NYPA is a leader in New York State. It is always a pleasure to work with such a prestigious organization," said Delfino.

The new Freightliner M2-106 is the first aerial hybrid in New York State and the first production vehicle from the Freightliner Corporation. The hybrid electric bucket truck utilizes Eaton's Hybrid Electric Power System with an electric motor that assists the Cummins Diesel engine with supplemental torque for up to 25 percent fuel economy gains in local haul applications. The system stores energy during stopping, through a process called regenerative braking, and then reuses it for acceleration. Fuel use, emissions and noise are greatly reduced.

The hydraulic system that operates the aerial bucket has the capability of a 62-foot vertical working height and is powered primarily from the electric motor and battery pack. It can remain silent and emission-free with the engine off for approximately 55 minutes out of each hour. The diesel engine needs to run for only five minutes to recharge the batteries, at which point the truck returns to full electric mode for the next hour. By reducing engine idle time in this way, the truck can achieve up to 60% in total fuel savings. The amount of fuel saved depends on the number of hours the aerial lift is operated.

As a result of the electric motor assistance, the truck's diesel engine was also downsized to 230 horsepower from the typical 275 horsepower commensurate with a 33,000-pound truck. Even when the diesel engine is running, its emissions are below normal because of the city's use of B20 fuel. One out of every five gallons of diesel fuel is replaced by vegetable oil, lowering exhaust particulates and reducing our dependence on foreign oil.

When Mayor Delfino took office, one of his first goals was to create a "walkable" downtown; streetscapes were improved and street lights were coordinated for efficient traffic flow and reduced emissions. The City of White Plains is home to the first hydrogen fueling station in the metropolitan area. Mayor Delfino was an early signatory of the U.S. Mayors Climate Protection Agreement to reduce global warming. He has also convened experts in development, the environment and sustainable building practices in an advisory committee on green technology.

NYPA's clean transportation program has placed more than 1,000 hybrid and all-electric vehicles in the fleets of numerous public entities, with 250 vehicles in Westchester alone.

Since the early 1990s, NYPA has worked with municipalities and school districts throughout Westchester to advance energy technologies and energy efficiency projects. In total, the Power Authority has completed almost 125 projects at 245 facilities in the county, saving taxpayers more than $7.5 million a year and reducing greenhouse gases by more than 59,000 tons annually.