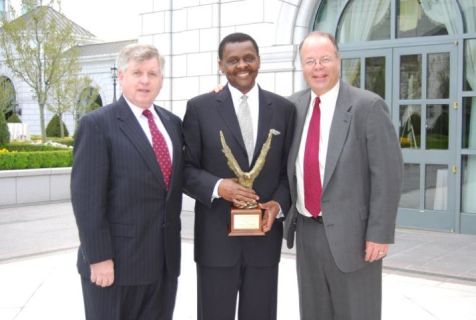 SALT LAKE CITY – Capping a career in public service that spanned more than 30 years, Windell Mitchell, fleet manager for King County, Wash., Department of Transportation, was named 2008 Public Sector Fleet Manager of the Year in an award ceremony at the NAFA 2008 Institute & Expo May 4. In his acceptance remarks, Mitchell announced he had retired only four days earlier.

Among the accomplishments cited in Mitchell’s nomination were planning and hosting the largest clean vehicle park-and-ride conference in the U.S., developing and implementing a model anti-idling policy, and establishing an automotive technician internship program. He was also instrumental in the creation of the Heavy-Duty Hybrid Truck Consortium, a collaborative vehicle purchasing effort of several Pacific Northwest public agencies.

Accepting the award’s eagle trophy, the Jamaican-born Mitchell spoke of his journey to the U.S. as a teenager with little money, finally settling in the Seattle area with an older brother. He went on to graduate from college and earn an MBA degree from the University of Washington. He worked for King County for 31 years.

Twenty-eight public sector fleet managers were nominated for this year’s award. Each completed a questionnaire outlining his or her accomplishments in nine areas of fleet management. A judging panel of 16 fleet managers individually scored each applicant’s nomination, assigning a numerical grade to each of the nine areas. The winner and two finalists were determined by the three top cumulative scores.