The yearned-for toys of yesteryear accumulate in many homes, played with the day they are received, maybe longer, but eventually abandoned and then forgotten. Information technology and software programs can meet much the same fate. They are acquired, implemented, users learn what they need to know to do their jobs - and that's it. As time goes by, users become less and less inclined to "play" with it and learn what more it can do. So an organization, such as a government fleet, that isn't maximizing the system only realizes a fraction of the benefits.

For the City of Seattle, fleet managers realized they could do more with the information technology (IT) they had, and by doing so, reap operational and money-saving benefits.

Ensuring Proper Use of Technology

The City of Seattle's fleet team, which includes Nanci Lien, fleet administration manager for Seattle, and Dave Seavey, fleet services director, contacted the City's IT vendor for help re-integrating and maximizing the system already in place. This involved assistance with correcting bad habits that had developed, reinforcing good habits, and generally instilling a stricter adherence to protocol so the system would yield more of the expected benefits.

The City fleet is comprised of 4,000 pieces of equipment, between 3,000-4,000 of which are used by City employees. This year, it is acquiring 26 Nissan LEAF electric vehicles and creating a recharging infrastructure for them, with $1.5 million it received in federal stimulus money, Lien reported.

According to Lien, she told AssetWorks, the City's IT vendor, they didn't need any new "toys" and already had "a lot of toys we haven't been playing with."

The re-tooling effort began in late 2009. "Our theme was 'data matters,' " said Lien. In reviewing its use of AssetWorks' system, FleetFocus, "We found our data was not as clean as it could be."

Training or, more accurately, re-training in the best use of the IT system was needed, so that "good, clean data" could be generated, Lien explained.

For example, she said the City of Seattle operates more than 30 fuel sites altogether, with three accounting for some 60 percent of fuel used.

Seavey and Lien concluded that many of the City's fleet vehicle operators needed to be retrained in the protocol for using the fueling system, so that good-quality data would be generated. At the pump, the system requires operators to enter critical information, such as their employee number, the equipment number for the vehicle being refueled, and the mileage. However, not all employees performed this task properly.

Employees whose names popped up on exception reports - meaning their odometer entries turned out to be inaccurate - were reminded in conferences of what was expected. But some employees had recurring problems. "Eventually, we restricted them from using the system," Lien said. "They were not able to fuel."

Part of the monitoring by the system is based on a "vehicle profile," including the type of fuel a vehicle uses (gasoline or diesel) and the maximum number of gallons the fuel tank can hold. "Nozzle-sharing" - refueling a vehicle and then just passing the nozzle on to the next vehicle operator - was a no-no, but had obviously occurred. Lien recalled one case in which 680 gallons was "dispensed" to a single Crown Victoria patrol car in the course of two days. Such episodes tended to occur out of impatience or disdain for the proper procedures, which she said were viewed as time-consuming and tedious, rather than with an understanding of how they could support timely, cost-effective maintenance of vehicles.

Installing radio-compatible rings around vehicle fill pipes was the curative for nozzle-sharing. The rings, working with antennas installed at some of the fueling sites, link the vehicle being refueled with the ID card an employee must swipe before starting the fueling process. The rings are installed on new vehicles added to the fleet.

Besides the City's own fueling sites, employees are permitted to visit a dozen retail stations where the City has accounts. The transactions at these stations were managed on paper. The stations kept forms on clipboards, where City employees were required to write their employee number, vehicle number, etc. The onerous monthly paperwork generated by this practice, compounded by occasional cases of illegibility or inaccuracy, was eliminated with the introduction of fuel cards issued to employees. This had the added benefit of greater accountability. Lien emphasized that issuing the cards to employees worked far better than, for example, linking each card to a particular vehicle.

"A car can't talk if we have a question," she explained.

Employees who received cards were instructed not to lend them to other employees and were told they would be held responsible. "We have cancelled cards," Lien said. "It's about behavioral change."

It's also about fleet size. As part of the overall re-tooling effort, the City retained a consultant to conduct a utilization study, which led to the shedding of some underutilized vehicles and the re-assignment of other units to the motor pool. For example, one department was assigned a vehicle that was only driven 7,000 miles in one year. "Do you really need it?" Lien asked. "Or can you use a motor pool vehicle?"

Such scrutiny resulted in 170 vehicles being moved out of the "department-assigned" category in 2009, Lien said. An option is to move all or some of them to the motor pool, where they may be used more efficiently, effectively, and widely, Lien said. 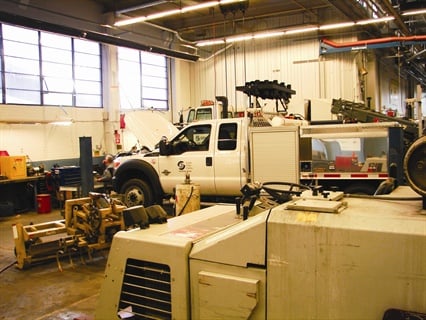 The motor pool is governed by a "key valet" program that is part of the FleetFocus system. Employees make vehicle reservations online.

Maintenance and the parts department came in for a tune-up, too. This involved ensuring the FleetFocus system for these activities was being used as intended. For example, work orders in the program are linked to parts inventory, so that as parts are used, replenishment orders can be generated.

"Our ultimate goal is to create a dashboard of five to 10 pieces of information," Lien said. This would include the number of vehicles in the fleet, the amount of fuel used, and mileage, on an ongoing basis.

Generally speaking, Lien said municipal governments do a good job researching software and in the initial training on how to use it, but then, "30, 60, 90, or 100 days after installation," there is often a fall-off in "after care." She likened the scenario to that of a consumer who purchases a personal computer and learns to use a fraction of the word processing and accounting programs.

In regard to the return on investment for all of the re-training and tweaking, much of which took place in 2010 and is ongoing, Lien said, "The ROI is being able to do the same or more with less of a workforce."

Like many municipal fleets, Seattle had to deal with budget cuts, including the elimination of between 15-20 "full-time equivalents," Lien noted.

Going forward, using the FleetFocus system effectively provides the fleet managers with high-quality data - the numbers they need to generate reports to make their case to the City administration for what they need.

Seavey said, "My view is that there is not as much emphasis on business management as there should be" in government fleet departments generally.

"We exist for vehicle maintenance," Seavey said, but without business management practices - close attention to the ledger - "extremely high costs" can result.

"Based on the decisions they make, supervisors and crew chiefs on the floor have a huge impact on how the budget is spent," Seavey said.

"This is not in any way meant to be a knock," Seavey said, "but in fleet maintenance a lot of managers used to be mechanics or in the maintenance field. They were really good at their work and they were promoted." However deserved such promotions are, they should be accompanied with training in budget management, Seavey said. He, Lien, and Ken Bailey, vehicle maintenance director, made a point of teaching those principles as part of their campaign over the past year and more, and aim to continue doing so, Seavey said.