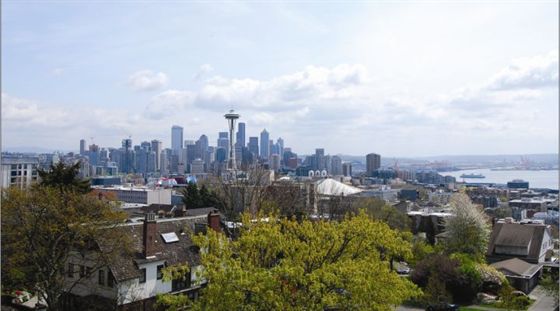 The City of Seattle continues to lead the “green” charge toward a healthier future. The City’s history of operating environmentally responsible vehicles makes it a vanguard in sustainability.
City efforts started in 1992 when officials began adding cars that run on compressed natural gas (CNG), a cleaner-burning fuel, to cut down on smog-forming emissions.

By 2001, the entire diesel fleet had been converted to cleaner ultra-low sulfur diesel, and work had started on retrofitting 400 of the City’s heavy-duty trucks with emissions control devices. These two measures alone cut toxics and particulates by about 50 percent per vehicle.

For Earth Day 2003, Seattle Mayor Greg Nickels and the City Council set a long-term goal of a 100-percent clean and green fleet — using advanced technology vehicles and fuels. In fall 2006, Mayor Nickels released the City’s Climate Action Plan, which details plans for continuing greenhouse gas (GHG) emissions reductions and greening the City’s fleets, as well as fleets throughout the community.

“One of the best things the City can do to protect and improve air quality — and to encourage smart fuel and vehicle choices in the community — is to make our own vehicle fleet a model of environmental best practices,” said Chris Wiley, green fleets coordinator of the City of Seattle, a rare position among municipalities, solely dedicated to “greening” the fleet.
The Fleet Services Division centrally manages the City’s vehicle and equipment operations (approximately 4,000 vehicles and equipment) to ensure timely, cost-effective, and high-quality vehicle replacement, maintenance, fueling, and short-term transportation.

Seattle uses a little more than 2.4 million gallons of fuel annually and employs more than 552 advanced-technology and alternative-fuel vehicles in its fleet, including 476 hybrid vehicles, 76 CNG-powered vehicles, and 43 off-road electric vehicles (16 of which are Segways).

The City operates approximately 800 diesel-powered vehicles that can run on biodiesel. Of the 58 vehicles in the general-use motor pool, 45 are hybrid or natural gas vehicles, two are electric bikes, plus two Segways for general use.

Alt-Fuel Vehicle Deployment Trims Fuel Use by 7.6%
Since 2003, 78 percent of the City’s new light-duty vehicle purchases have been hybrid or biodiesel vehicles, resulting in higher miles per gallon and significantly lower GHG emissions, as well as several other positive results.

By the end of 2005, Seattle’s overall fuel use was down 7.6 percent compared to 1999, a reduction achieved as the City expanded services and fleet size. At the same time, Seattle also decreased its petroleum component of fuel by more than 12 percent. The petroleum reduction resulted primarily from a switch to blend of 20-percent biodiesel and 80-percent ultra-low sulfur diesel. More fuel savings were realized by replacing ­conventional vehicles with higher-mileage hybrids when possible.

“We began using ultra-low sulfur diesel in 2001, moved to B-20 quickly thereafter, and then made a leap to B-40 in 2008, which has given us significant reduction in the amount of petroleum fuel we ­consume,” Wiley said.

The City also has specified, since 2002, all new eligible diesel vehicles and equipment be delivered with factory-installed emissions control technologies.

“Mayor Nickels knows global warming is a real threat, which is why he initiated the U.S. Mayors Climate Protection Agreement and other initiatives to protect the climate. He is the main catalyst behind making smart vehicle and fuel choices to meet our greenhouse gas emissions reduction goals,” Wiley said.

Challenges Encountered During Green Transition
Since announcing the City’s goal of 100-percent green fleet, key milestones have been met along the way.

However, Seattle encountered challenges with CNG vehicles in the conversion to a clean and green fleet: the unavailability of CNG models and a lack of a robust local fueling infrastructure. Prompted by these ongoing issues, the City divested of its own CNG fueling capability and, consequently, the purchase of new CNG vehicles.

Biodiesel use also has presented challenges. Seattle began fully integrating B-20 in 2001, but logistical problems prolonged a complete conversion of the City’s diesel tanks to B-20. Most of the delay was due to difficulty in getting B-20 delivered to the City’s smaller or more ­remotely located tanks.

However, by the end of 2008, excluding emergency services, more than 97 percent of the Seattle’s diesel fuel storage was converted to B-40. The City is testing use of a locally produced waste grease biodiesel that would help Seattle’s fleet transition from virgin seed-crop-based biodiesel and further reduce GHG emissions. (Last May, Seattle stopped purchasing soy-based biofuels following a draft Environmental Protection Agency report on the GHG profile of different fuels.)

Seattle Goes Above and Beyond the Norm
As part of Mayor Nickel’s emphasis on reducing GHG emissions, the City of Seattle has committed to voluntarily meeting or beating the Kyoto Agreement target of a 7-percent reduction by 2012, compared to 1990 levels. For Seattle, this means reducing emissions of carbon dioxide and other climate-disrupting GHG by about 680,000 metric tons, roughly the GHG emissions produced by 147,000 cars in one year.

The agreement is an international environmental treaty produced at the United Nations Conference to achieve “stabilization of greenhouse gas concentrations in the atmosphere at a level that would prevent dangerous anthropogenic interference with the climate system.”

Seattle received a Clean Cities Award in 2006 from the Puget Sound Clean Cities Coalition for its efforts in greening the City fleet. The coalition is a voluntary, public/private partnership that works to advance the region’s environmental and public health, energy security, and economic development by promoting policies and practices to reduce petroleum consumption in ­transportation.

Seattle also recently helped the Puget Sound Clean Air Agency develop the Evergreen Fleets program (www.psgreenfleets.org). A certification process, Evergreen Fleets is modeled on the LEED rating for buildings, which awards organizations accumulated points for green fleet activities and ranks them based on these efforts.

Wiley pointed out, “By participating in the Evergreen Fleets program, the City can show other municipal and private fleets the value of meeting the program’s criteria, which will reduce pollution and save money from fleet operations.”

Seattle’s fleet team will continue discussing the “big vision” of its 100-percent advanced-technology fleet, including diversity of fuels, accessing best available technology, and providing the infrastructure for the electric vehicle age.

“We are starting to look harder at the region’s capacity to turn waste products into fuel, whether it’s biomethane, biodiesel, or ethanol. We are also excited about the potential for electric vehicles in many different applications, so we can fuel with our cheap and clean Northwest energy,” Wiley said.