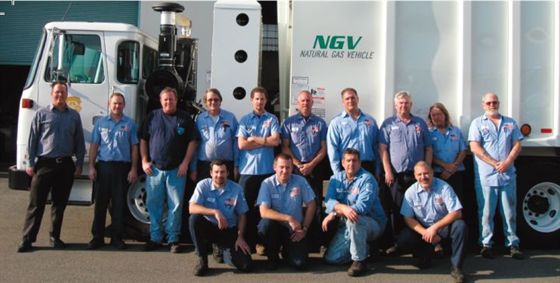 The City of Burbank, Calif., recently placed into service a new 2009 solid waste rear-loader collection truck powered by compressed natural gas (CNG). This small addition to the City’s 485-unit fleet is significant as it completes the goal of a 100-percent natural gas-powered solid refuse fleet.

David Rodriguez, fleet superintendent, said the switch to CNG has been relatively easy, aside from the up-front costs. Each unit costs roughly $65,000 more than diesel-powered vehicles, and a capital dollar investment is required to build the infrastructure for retrofitting repair shops and building fueling sites.

“The City’s stance has always been that we understand the technology costs money, and it’s our responsibility to use our money wisely,” Rodriguez said. “We feel it’s more prudent to pay extra initial capital outlay and give our citizens and geographical area better air quality.”
Nestled between two major freeways and home to an airport and active train rail system, Burbank’s focus on emissions reduction is important to city leaders.

Immediate Payback Seen
The City is seeing immediate benefits from the use of CNG. With vehicles running all day, emissions reduction is significant. CNG costs about $1 less per gallon than gasoline and diesel fuels, which means big savings for the City.

“Take a refuse truck that’s driving eight hours a day, five days a week, and gets about 5 miles to the gallon. That means a lot of savings, not only in the carbon footprint, but in dollars to us,” said Ari Omessi, assistant public works director.

With the switch to CNG, Burbank’s fleet has also realized reduced maintenance and repair costs.

“The CNG engine seems to be bulletproof,” Rodriguez said. “Other than oil changes, we’re not seeing any major component malfunctions.”

A surprising benefit has been the quieter-running CNG engines. This noise reduction is another benefit to the City and, in particular, its citizens.

“Diesel is noisy; these are whisper-quiet,” Omessi said. “Imagine the noise associated with a trash truck accelerating away from a stop or a sweeper cleaning streets. Most of these vehicles go out before 7 a.m., so the audible noise difference is a real benefit.”

Despite the advantages, complaints associated with CNG vehicles include frequent fueling. Because CNG takes up more tank space than conventional fuels, drivers must fuel up more often, a challenge when fueling sites are limited. However, the City has worked around this roadblock. Its vehicles are fueled on-site overnight, so every day, CNG units start with a full tank. Further, each truck is spec’d with tanks capable of holding 60 gas-gallon-equivalents (GGE), providing enough fuel for trucks to complete a day’s route without returning to the City site for fuel. 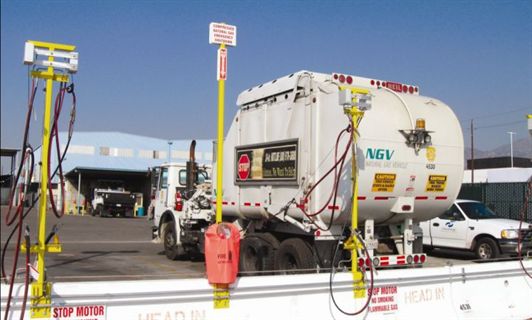 Committed to Green Early
The focus on replacing diesel units with CNG refuse loaders is only part of the City’s commitment to a greener fleet. Burbank’s public works fleet also employs propane, hydrogen, and electric units. This commitment to a greener fleet began in the early 2000s, when the City dedicated itself to getting dirty diesel vehicles off the road. After reviewing alternative-fuel options, city and fleet officials settled on purchasing CNG vehicles.
“This meant a commitment by the city council and city manager to fund the costs. We also had to build a fueling source and retrofit the garage to work on the vehicles,” said Rodriguez.

“Public Works fleet is honored to have a city council that is so proactive and positive for these types of vehicles. It’s their support that got us here. They had the foresight and the wisdom to go ahead with it,” Omessi said.

By 2004, the City operated 11 automated side-loader refuse trucks and had built a public-access CNG fast-fill station to fuel the units. With a high demand for CNG fueling in the area, the public station is now one of the region’s busiest, providing a fueling site for neighboring cities and school districts within a 30-mile radius.
With a fueling station in place, the City began purchasing CNG sweepers, bucket trucks, and utility trucks to replace diesel models. In 2005, city officials replaced an additional 11 side-loader refuse trucks, totaling 22 CNG refuse haulers in the 28-unit refuse fleet. With six diesel units left — five front-loaders and one rear-loader — each was eventually replaced with a CNG unit as their lifecycles ended. With the recent replacement of the last diesel rear-loader, the refuse fleet is now 100-percent CNG-fueled.

In 2005, the City of Burbank also retrofitted a repair garage to accommodate the new vehicles and in 2009 built a time-filled fueling station at the corporate yard to fuel city refuse trucks overnight. This addition offered a second supply line and reduced the burden on the public fueling station.

Diversifying Matters
The City currently operates fewer than 60 diesel-powered vehicles/equipment in its Public Works fleet, including on- and off-road equipment. These vehicles are replaced with cleaner models. However, Rodriguez and Omessi underscored the importance of deploying vehicles powered by a variety of fuels.

“The delicate balancing act we have is that behind everything, we need to make sure our fleet is diversified. In the event of an emergency, we don’t want to be idle and unable to provide critical city services if a particular fuel source is cut off,” said Rodriguez.