Once again, Chevrolet has captured the Fleet Car of the Year award with the 2010-model Malibu taking top honors. For the fifth year in a row, Chevrolet has won Fleet Car of the Year. Last year, the Malibu also took the top prize, while previously, the Impala won three years running.
Fleet professionals voted on the top 2010 model-year fleet vehicles in the annual online award program sponsored by Automotive Fleet and Business Fleet magazines.

Qualified fleet buyers voted on 75 2010 model-year cars. Fleet managers could vote for one vehicle in both car and truck categories and were encouraged to select the car and/or truck that best fit their company fleet needs, considering features, function, styling, maintenance, remarketing value, OEM service, and driver feedback. Votes were cast on www.automotive-fleet.com.

Inaugurated in 2003, the Fleet Car and Truck of the Year awards continue Automotive Fleet magazine's efforts to promote excellence in the fleet industry. In addition to spotlighting outstanding fleet professionals with its Fleet Manager of the Year Award, the magazine extended that recognition to the products and tools that allow fleet professionals to do their jobs at the highest possible level, including vehicles they select to perform their companies' missions.

"We're honored and proud of this accomplishment," said Brent Dewar, vice president of the Chevrolet Global Brand. "Knowing that fleet managers vote for their favorites and have chosen the Chevrolet Malibu once again gives us validation that our customer focus is on the right track."

Malibu the 'Surprise of the Automotive World'

Labeled the "surprise of the automotive world" by US News & World Report and considered by many one of the best values in the mid-size sedan market, Malibu's sporty personality is established by its long wheelbase, short overhangs, and tight wheel-to-body relationship. Vehicle control is further enhanced by the standard four-wheel disc brakes with ABS and StabiliTrak.

For 2010, the Malibu's trim levels (the LS, LT, 2LT, and LTZ) remain largely unchanged. LS and LT have a 169-hp 2.4L four-cylinder engine, now capable of running on E-85 ethanol-blended fuel. LS versions have a 4-speed automatic transmission, while the LT and LTZ use a 6-speed automatic. LT and LTZ offer an optional 252-hp 3.6L V-6 that teams with the 6-speed automatic. 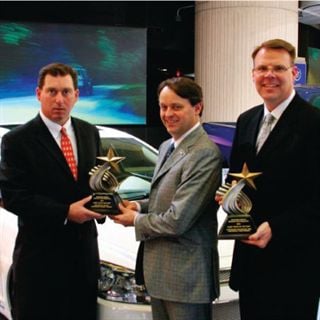 In addition, according to Dewar, the fuel economy of the Malibu now leads its respective segments.

After undergoing a complete redesign in 2008 and minimal changes in 2009, the 2010 Malibu model integrated a few new elements, including:

"At Chevrolet, we believe one of our strengths is demonstrating continuous development throughout a product's lifecycle," Dewar said. "The Malibu, since winning the 2008 North American Car of the Year, has seen significant enhancements, including a 6-speed transmission mated to the four-cylinder engine for further fuel economy and performance improvements, along with creature comforts like adding power lumbar adjustment for the driver and USB connectivity."

The bottom line for the Malibu is to continue setting high standards in class, quality, confidence, and control for the mid-size segment. Maintaining expressive styling, exciting powertrain combinations, and technology advancements keep this model at the top of the list for fleet selectors.

Dewar concludes the Malibu's success comes from Chevrolet remaining in touch with fleet managers and understanding their needs.

"This plays a huge role in knowing the right vehicle to deliver to our customers," he said. "A combination of value, capability, and reliability are attributes that succeed in the marketplace, and we feel that the Malibu delivers these."

Read more about Chevrolet Fleet Car of the Year Awards