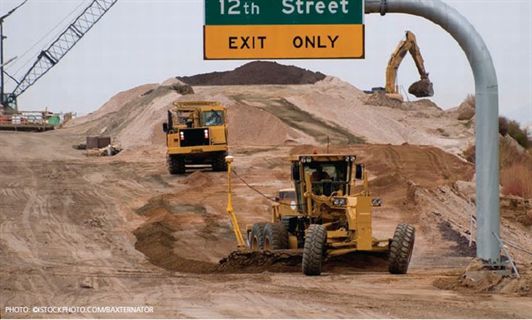 User departments can make mistakes with heavy construction equipment. However, there are ways to avoid these common and not-so-common mistakes. In interviews, a number of government fleet managers described frequent missteps, largely concerning spec’ing, accurate forecasting of equipment utilization, and some operational/training issues.

Spec’ing Inaccurately
“One of the problems in municipalities, when they spec and purchase equipment, is that they don’t spec it heavy enough,” said Tom Collins, equipment maintenance supervisor for the town of Natick, Mass. “They just spec to what’s out there.”

Collins explained, “You’ve got to spec for the minimum job you expect the piece of equipment to do, then add to it because you’re never going to get rid of it when it should normally be gone.”

Municipal fleets tend to keep such equipment longer than its typical allotted service life, Collins and others noted.

“If the life expectancy on the street is five years, any city or town is going to have it 10 to 12 years,” Collins said. “So when I spec a piece of equipment, I usually go a little above and beyond because I know it’s got to last.”

Coming to agreement with user departments on what exact equipment is needed is a continual challenge, said Warren Patrick, fleet manager for Harford County in Maryland. “I think oftentimes, the using agencies have a difficult time discerning what it is they need to have their equipment do,” he said. “Some of them come up with the craziest, cockamamie stories about why this one piece of equipment is the only piece that will do this job, and there’s absolutely nothing else that will work.”

If user department staffs include knowledgeable, experienced operators, they should be sought out and consulted, Patrick suggested. These subject matter experts can be valuable contributors to spec development.

“I usually have the division I’m working with for a particular piece of equipment give me their thoughts,” said Steven Hawes, garage and equipment supervisor for the town of Needham, Mass. “We’ll bring a demo machine in, and have the operator get his hands on it.”

The value of operator input “depends on the individual,” Hawes said. Some have a pretty sound grasp of what the specs should be, Hawes explained, and their suggestions are given due consideration.

Researching Utilization Options
“We tend to keep equipment longer than some contractors might,” Hawes said, echoing what his peers in other municipalities said about anticipated heavy equipment service life. “So we have to make sure we’re picking the best for the town’s needs,” he continued.

“There may not be a lot of heavy construction use, but there’s a lot of maintenance work. Usually we’ll pick a different machine than a contractor might look at.” The town typically needs something a bit more versatile than a contractor would require, Hawes said.

“It’s going be used by more than one department, for more than one type of job or project,” Hawes said of any heavy equipment the town acquires. “It might be at the Water Department one day, but the highway crew or park commission the next, so we need flexibility.”

Another consideration: If equipment is not used steadily, why invest in it at all? The economic slump has given added importance to this question.

“It might be better to just rent it, from a utilization aspect,” said Patrick of Harford County. He noted, for example, the local John Deere vendor and a number of Caterpillar dealers in the area have “lots of repossessed equipment sitting on their properties because the construction business took a dive.”

That inventory creates opportunities for short-term leases and leasing by the project, Patrick said. Harford County has taken advantage of such opportunities in some cases, “because our budget is tight. We’re not looking at replacing some things,” he added.

With a reduced budget-cutting project funding, the cost of materials can be the deciding factor in whether to purchase a piece of equipment, Patrick pointed out.

“We had a grader that went down and I had it on my replacement schedule,” he recalled. But managers said they didn’t know for sure whether they were going to have funds next year to purchase the materials for the grader to use, Patrick said. The grader acquisition was postponed. “If need be we’ll lease a grader on a short-term basis,” he said.

“If you’re not really booked with a bunch of work back-to-back, it might behoove you to include leasing as an expense when you bid a project,” Patrick commented. “Equipment is very pricey. If you’re going to spend $800,000 to $1 million on a piece of equipment, you better darn sure have it booked.”

For example, Patrick noted a sales brochure highlighting a grader for lease at a rate of $110 an hour, with an eight-hour minimum. “That’s $880 for a one-day shot,” he said. A job would have to be small to prompt a fleet to hire equipment for such a short time, he observed. However, the brochure also described weekly, monthly, and yearly rates for the piece, Patrick said.

Leasing does incur additional costs. “Just to transport some of this equipment — to bring it over the road — is expensive,” Patrick noted.

Leasing choices must be based on comparing costs with the return on investment on acquiring the equipment, Patrick said.

“We have been approached in years past about leasing equipment,” said Hawes of Needham, “but it depends on financial circumstances — bond rates — and that’s not my end. It’s handled by a whole different department.” Hawes said the fleet had not leased equipment in 15 years.

Training for the New
Because heavy equipment is usually kept and used for so many years, some adjustment is often required when the time finally comes to operating a new piece of equipment. Call it the “shock of the new.”

“Things can change considerably,” noted Hawes of Needham. “Our operators always need some further training, no matter how good they were on the previous machine. Controls could be placed differently. There’s always something different.”

A good working relationship between fleet and user departments can go a long way toward avoiding common mistakes related to managing heavy construction equipment. The ideal is a partnership that begins with the spec’ing process and extends through the service life of the equipment to its eventual resale or trade-in. By collaborating, fleet and user departments can benefit mutually, both in day-to-day operations and over the long-term.