Launched this spring, Toyota Motor Sales' third-generation 2010-MY Prius raises everything but its fuel consumption. Achieving a combined EPA-estimated 50 mpg rating, the company estimates 180,000 units of the new model will be sold for the full 2009 year.

With EPA-estimated 50 mpg city and 49 mpg highway ratings while driving in standard mode, the vehicle's fuel efficiency can be pushed to even greater limits when driving in Eco Mode, one of three additional modes available, which also include EV and Power Modes.

Eco Mode helps "take the lead foot out of the lead-foot driver," while the quietness enabled by EV Mode works well for neighborhood driving," said Chris Risdon, senior product education and development administrator, University of Toyota. The Power Mode "puts the sportiness back in the Prius" - particularly in conditions such as driving on mountain roads and freeway acceleration.

A full hybrid system, the vehicle can run on gasoline or electric power, or a combination of both, said Bob Carter, group vice president and general manager of the Toyota Division. 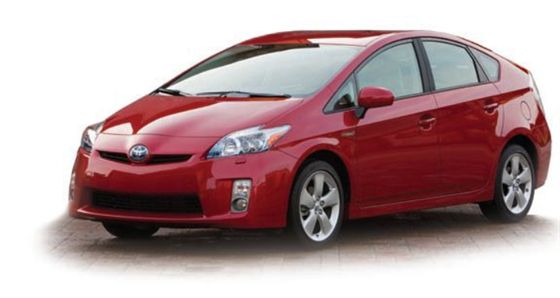 From start to finish, the development of the new, third-generation 2010-MY Prius took four and a half years, Otsuka said.

The shape of the new model has been updated, with the peak of the roof moved back to allow more headroom for backseat passengers. An available solar panel roof helps provide added ventilation.

Inside, the vehicle also offers more rear seat room, with rear seat knee space increased by 0.79 inches for better seating space. The vehicle is a half-inch longer overall, said Risdon. In terms of cargo capacity, storage space is confined to the rear of the vehicle.  Other new features include Lane Keep Assist safety technology and Intelligent Parking Assist, which uses sensors on the front and bumper sides to automatically park the vehicle.

As of April 2009, more than 707,000 Prius units have been sold in the U.S. since the original first-generation model debuted in 2000. In addition to the new Prius, the Toyota Lexus division expected to launch in summer 2009 its fourth hybrid, the 2010 Lexus HS 250h - the world's first dedicated luxury hybrid vehicle.