Jack Roush, chairman of Roush Enterprises, began his career in the automotive industry in 1964. At the age of 22, Roush worked for Ford Motor Company as a quality control inspection engineer and a process engineer. In an interview with Green Fleet, Roush described the benefits of propane use for fleets, which can  achieve significant savings in operations with this alternative-fuel option.

GF: How did you get involved with propane?
ROUSH: People wanted a work truck that could lower both operating costs and greenhouse gas emissions. We’ve got an EPA-rated emissions laboratory for determining mileage for vehicles on the highway and working with vehicle manufacturers to verify new vehicles comply with various state and federal emission standards.

GF: What economic advantages Does a propane truck Offer?
ROUSH: Propane offers fleet operators economic advantages over conventional gas fleets, operating at 5-30 percent less than those of gasoline fleets. Battelle Memorial Institute found that propane is the most economical alternative fuel for fleets (on a per-mile basis) when operating, ownership, and infrastructure are taken into consideration.

Tax credits for conversion costs are based on GVWR. The greater the vehicle weight, the bigger the credit (the F-150 credit is $2,500;  and F-250/350 credit is $5,000). A 50-cent per gallon federal tax credit exists for fleet operators who have their own fueling infrastructure installed.

There are 2,500 locations around the country that can supply a public fueling station for propane, 6,000 U-Haul rental agencies with public fueling stations, and a number of oil companies that have gas stations on highways that already have propane stations or are in the process of installing them. So infrastructure exists, and fuel is available at a reasonably low cost.

Many state, county, and city agencies also have special propane incentives for fleets that qualify.

The beauty of our system is it’s easy to operate, easy to service, and is supported by the same warranty that we have for gasoline engines. There’s no degradation of warranty; the infrastructure to a great extent already exists; and it is relatively inexpensive to expand.

If you were a fleet operator and you wanted to use propane in your fleet, most suppliers would either put a fueling station in for you at no cost, or do it at a much reduced cost that would make it very attractive.
[PAGEBREAK]
GF: What are Propane’s environmental benefits?
ROUSH: From an environmental point of view, propane versus gasoline reduces greenhouse emissions by 19 percent, creates 20-percent less nitrogen oxide and up to 60-percent less carbon monoxide, and has fewer particulate emissions, such as carbon clumps, compared to gasoline. So it’s a huge benefit to the environment.

Propane itself is not a direct greenhouse gas when released into the air. Our system delivers propane to the injectors. The engine sees a liquid at the back side of the injector that becomes gassy as it goes inside the injector, just like gasoline or diesel. So it’s easy to compress and make into a liquid, and it’s safe to store and operate. Also, propane vapor is removed from the atmosphere faster than it takes to become well-mixed and impact the global climate. Fewer deposits form in combustion, which benefits engines.

Propane also has the narrowest flammability range of any fuel, so it’s not highly flammable. It powers more than 200,000 vehicles on the road today in the U.S. The biggest users are in Europe, South Korea, and Australia, where propane is called Autogas. It’s unlikely we’ll overtake gasoline in the U.S., but certainly if we replace 10 percent burning gasoline, we’ll have a huge impact on our environment. 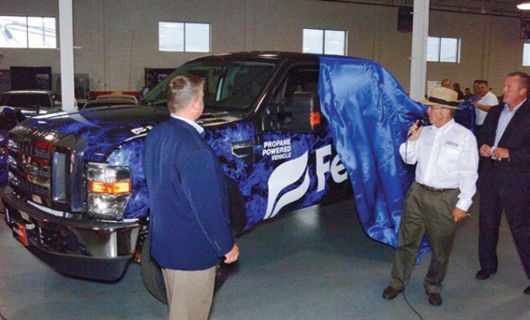 Propane has a more ideal combustible mixture of air than gasoline, so you have a degradation of fuel economy about 10 percent. If you’ve got a car that gets 20 mpg on gasoline, you’d get about 18 mpg on propane.
Our F-250s have a 55-gallon useable capacity — useable because of the 80- percent fill limit on any propane storage container. This 55-gallon capacity provides a range of about 500 miles, depending on road and driving habits. So you don’t have to think about operating in a small radius. The filling operation for propane takes about as long as it does to fill a gallon of gas.

The only thing that feels the least bit different is you turn the key on, engage the starter, and depending on how cold the atmosphere, you wait about three seconds for the system to prepare itself to have the right temperature and the right flow of propane into the injectors.
[PAGEBREAK]
GF: How was Ferrellgas selected for the F-250?
ROUSH: Ferrellgas is a supplier of propane, so they’ve got a vested interest in getting propane into fleets. They’re looking for solutions for fleet operators’ problems and to help them recognize opportunities for savings.

We delivered to them an early F-250 that they’ve been on the road with and visiting with fleet users around the country. They were dealing with one fleet operator for a van (an E-250 or E-350 application), and they were able to substantiate for his level of use $3,200 in savings per van.

Demos have also been in the hands of other fleets. DeKalb County in Georgia was probably our biggest user customer with around 30 F-150s. We also put one with a Texas legislator, and we moved them around to a number of people who we thought would have some influence on fleet operators in their area. We offered some to state agencies and government agencies as well.

GF: Why should fleets consider using propane?
ROUSH: Propane is a fuel whose time has come. It creates green-collar jobs, it’s environmentally friendly, and we have the infrastructure and qualities that benefit our economy and our environment. We’ve got the delivery methods and a fleet of demo vehicles available to demonstrate the towing capability and driving qualities of propane.