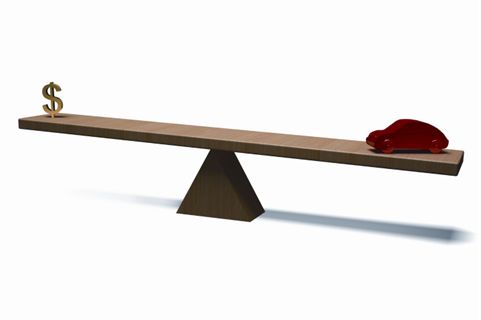 Making smart fleet remarketing decisions these days isn't easy in the topsy-turvy used car market. Some eight to 10 months ago, bringing a used pickup or SUV to auction was like bringing cattle to the slaughterhouse. It wasn't pretty.

Compact and economy cars, on the other hand, enjoyed irrationally high values brought on by the highest fuel prices ever. By the end of June 2009 the market had come down to earth. Truck prices continue to rebound and small cars have deflated to near "normal" values.

However, there are new market forces at work, including a looming used car supply shortage driven by the recession and the credit crunch. What will that do to prices for used fleet vehicles, especially for models of the companies emerging from bankruptcy?

Adesa Analytical Services reported that average wholesale prices in June ($10,167) were above $10,000 for the first time since April of 2008.

Manheim's Used Vehicle Value Index stood at 114.1 for June, up 5.8 percent from June 2008 and 16.4 percent from the beginning of 2009. June marked the sixth consecutive monthly increase in Manheim wholesale used vehicle prices.

These increases can be attributed to a lack of supply coupled with a healthy demand for used vehicles. Over time, supplies of trade-ins should resume as new vehicle sales pick up, which will lessen upward pressure on used vehicle prices, says Tom Kontos of Adesa in his July commentary.

KBB data shows that in June all seven car segments declined for the first time in 2009, though this falls in line with normal seasonal depreciation trends.

Once again, the smaller, more fuel-efficient car segments, including subcompacts, hybrids and compacts contributed heavily to the trend, depreciating 2.5, 2.4 and 2.3 percent respectively. KBB contends that the depreciation in compacts and hybrids could continue for some time.

The return to normal depreciation for the truck segments predicted last month has been delayed, given a surprising upsurge in truck values over the last 30 days. This is most likely attributable to reduced supply at auction and steady demand, which will continue, according to KBB.

The Ford Expedition EL and Toyota Tundra are two examples of vehicles benefitting from low supply at auction, increasing 6.1 percent and 5.1 percent respectively.

In the minivan segment, the Chevy Astro, Nissan Quest and Honda Odyssey all showed significant gains, increasing 12.9 percent, 12.4 percent, and 6.5 percent respectively. KBB says the recent strength in minivans can be attributed to a lack of supply at auction and their affordability.

Vehicles in the crossover segment were mostly flat in June (-0.3 percent) but should remain stable for the foreseeable future, according to KBB. 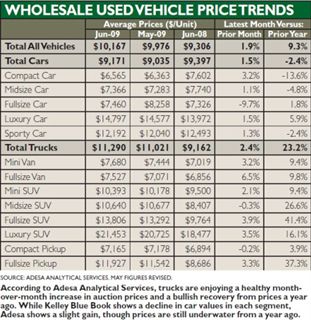 Automotive Lease Guide (ALG) data through mid-June indicates that bankruptcy may not have had as immediate an impact as anticipated over new and used market performance for the Chrysler brands.

New market transaction prices for Chrysler held steady in May and early June with few exceptions, with movements consistent with competitors, ALG reports. In terms of new sales numbers, Chrysler brands were up by about 3 percent (excluding fleet sales) in May over April 2009 with more strength in car models. The overall industry showed 13 percent improvement in May over April.

Auction values have been neutral in the same time period, consistent with competitors' trends. "The speedy Chrysler bankruptcy showed no immediate impact on new and used market metrics through most of June; however, uncertainties in the longer term remain," said ALG in its report.

At the end of June, Ricky Beggs, managing editor of Black Book, reported, "From early on we have reported no difference in the trends from those in court-directed operations versus those from manufacturers still independently conducting business."

However, ALG bumped up residual values for all three Chrysler brands in July, primarily because of the automaker's rapid exit from bankruptcy. But the values are still lower than they were before Chrysler LLC filed for Chapter 11 protection.

CNW Marketing Research's Residual Value Projection outlook for Chrysler and GM is not as rosy.

To achieve its monthly calculation of Residual Value Projections, CNW looks at lease contracts written in the current month. CNW compares the stated residual value in the contract at the end of the three-year term and compares it to a projected wholesale value at the end of three years. The projected wholesale value is based on anticipated economic and auto industry factors as well as model and segment changes.

"Both GM and Chrysler future prices have sunk from decent levels just 18 months ago to abysmal this year," reported Art Spinella in CNW Marketing Research's June Retail Automotive Summary. "In GM's case, the difference between projected values found in three-year lease contracts and CNW's estimate of what those same vehicles will be worth at wholesale at that time stands at 57 percent in May compared to 84.6 percent in January 2008.

"Chrysler suffers even more as many vehicles being sold are heavily discounted retail and fleet units," said Spinella. "Even with already lowered residual value projections from the arbiters of such data including ALG and KBB in current contracts, the likelihood is that true wholesale prices three years hence will be barely 34 percent of contractual values."

For comparison purposes, the report states that the industry average in May was 62.3 percent. CNW estimates that Ford products will retain 73.5 percent of today's three-year lease contract value; Toyota, 63.1 percent; Honda, 81.7 percent; and Nissan, 67.3 percent.

The report concludes that of the Big Six automakers, only Ford has been on an upward trend this year and has a residual value projection higher than at any time since July of last year.