Size matters in a commercial truck's fuel consumption and emissions output. The bigger and heavier the truck, the more horsepower required to push it around, the more fuel it consumes, and the more pollution it creates.

With one of the largest utility fleets in the country (2,900 road-licensed vehicles and 1,600 off-road vehicles, fork lifts, and mechanized equipment for powerplants), FPL has also been a leader in adopting hybrids for commercial use.

In 2001, the agency was the first purchaser of hybrid cars for commercial use, and in 2005, took delivery of its first medium-duty hybrids, after volunteering to lead a working group for WestStart-CALSTART to develop such trucks for the utility industry, says Survant.

FPL's fleet of Class 7 (primarily 27,000-lb. GVWR) conventional and electric plug-in hybrids has grown to more than 60 units. Though economic conditions have forced the utility to delay its normal replacement cycle by a year, hybrids will continue to play a key role in future purchases. 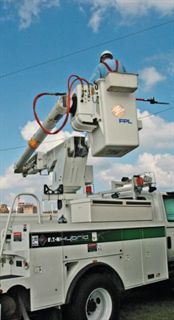 The remaining hybrid vehicles - conventional diesel-electric models -  combine Eaton's driveline, including hybrid technology, Altec lift equipment, and International's cab and chassis and powerplant.
Survant notes the large, complex devi- ces require significant systems integration. "This is a new departure in energy storage and management. Many people don't understand that a hybrid is really an energy management device, allowing you to store energy on board and use it without running the main powerplant."

All FPL units are equipped with power take-off (PTO).

On a utility truck, the boom is the primary PTO operation, but PTO devices are ubiquitous in the vocational truck business. For example, Survant points out, the hybrid technology benefits a roofing contractor who uses a truck to lift big packages of shingles or tiles at a jobsite or a liftgate truck that runs the main powerplant to help workers unload heavy cargo.

Big diesel powerplants consume enormous amounts of fuel while parked and idling to operate a boom or other lift equipment. A hybrid, running that equipment from its stored energy/battery, can cut fuel consumption in half.

Survant notes his conventional Class 7 hybrids can operate 1-2 hours with the powertrain off.  When sensors detect low battery power, the truck's engine automatically self-starts, without interrupting the operator's work. The powerplant runs for just four minutes to recharge the batteries.

PHEV models have range-extending batteries allowing longer periods of boom operation before the powerplant kicks in. The boom operates about 4-5 hours, for example, before requiring 15 minutes of powerplant operation as the batteries recharge - an automatic, seamless transition requiring no work stoppage.

Survant notes several hybrid upfitters and other hybrid applications are currently available. One popular application uses the hybrid's energy storage only for the PTO. Launch assist is not available while the truck is running in traffic. The purpose is to obtain PTO fuel savings without the extra expense of full hybridization conversion.

"Fully hybridized" models offer a feature called launch assist, which provides fuel savings in heavy traffic and low-speed operation, or when the boom is engaged by enabling the truck to run off its powerplant or hybrid system/batteries energy, or a combination of both.

FPL discovered fuel savings vary widely, depending on the truck application and workload. FPL's Azure/Ford conventional delivery vehicle, for example, may achieve a 30-percent reduction in fuel use; typically, its savings are 22-25 percent.

That figure must be weighed against the hybrid's lower cost versus a PTO-equipped model. The delivery vehicle's chassis and powertrain cost about $60,000. Azure's PHEV system typically adds about half the price of the hybrid system used on FPL bucket trucks, says Survant.

By comparison, the hybrid system on FPL's most recent batch of PTO-equipped conventional hybrids cost $51,000-$52,000. PHEV models add another $35,000, says Survant. Similar costs continue to deter high-volume purchases of the trucks. However, conventional hybrids that see a considerable amount of PTO usage can save nearly 50 percent of normal fuel consumption.

Fuel savings can pay for the cost of hybridization in four years if diesel costs $5 per gallon, as it did last year - ultimately "providing a net gain" over a vehicle's service life, in FPL's case, an 11-year vehicle replacement cycle. At $2.50 per gallon, hybridization would pay for itself  in eight years - still providing a net gain in the last three years of the vehicle's life. 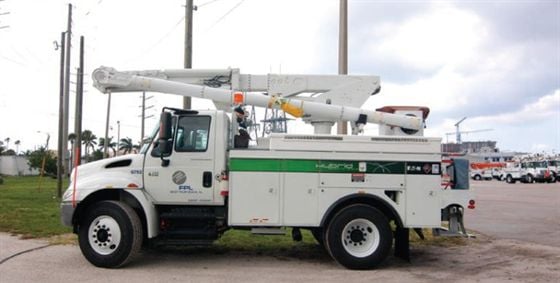 The math is based on a medium-duty PTO-equipped model that burns about 20 gallons of fuel daily. It is also based on FPL trucks typically working considerable overtime during the week, enough to consider the vehicles "six-day-a-week" trucks.

In its cost calculations, FPL also factored a generous estimate of $30,000 for replacing the vehicle's hybrid system batteries after six years, though, Survant says, the utility has no idea how long the batteries will last.

"We have not seen any credible industry numbers (on battery replacement), and, as a measure of prudence, plugged in a fairly large amount of money for their replacement," Survant says.

The utility's conservative cost savings estimate also excluded potential savings on maintenance. Overall, the new technology has proven to be "very good trucks." Survant says one PHEV model has been "working in downtown Miami six days a week since last September and [is] operating flawlessly."