Finding good technicians for your shop is something akin to the weather. Everybody talks about it, but nobody is able to do anything about it. And everyone, from local garage owners through dealership service managers to fleet managers, complains about the difficulty of finding knowledgeable technicians who really want to work.

Dave Cole did something about it. Cole, who runs the service shop for the City of Glendale, Calif., got tired of finding no applicants, candidates whose backgrounds were shady, or backyard mechanics without professional experience.

The PCC staff was interested in Cole’s proposal. “I got involved with the college because I’m on the advisory committee for the automotive section,” Cole said, adding, “We meet every six months to discuss buildings, future programs, whatever they’re working on.” 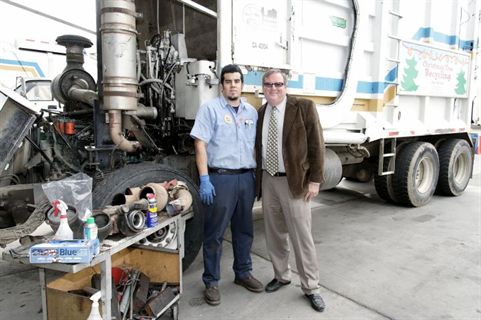 According to Cole, the City of Glendale is a hiring magnet. “People want to work for the City,” Cole noted, “So I went to the advisory committee, which includes all the instructors, and told them we should put something together. ‘Let’s work together to develop an internship program.’ ”

Part of the problem Cole and others face in assembling a knowledgeable and enthusiastic workforce is a lack of qualified applicants. “We get some people who, when we ask what their experience is, answer, ‘I worked on cars with my Dad in our backyard.’ And that was all the experience they really had,” Cole explained.

Affiliating the internship program with the PCC auto mechanics program has made a big difference. “We get good, smart young people who are going to school and want to be in this trade,” Cole said. “It’s been fabulous.”

He noted the program brings people knowledgeable about electronics, Snap-On scanners, and the basics of today’s increasingly diverse and complicated vehicles, and who are ready to learn about the City’s specialized vehicles.

“If they have a good basic skill set, they can come in here and learn things they didn’t learn in college,” Cole explained.

The City of Glendale intern program complements the PCC program in which students learn electronics, engine rebuilding, and transmission rebuilding. At the City, students learn hydraulics, air brakes, and heavy equipment, and work on everything from lawn mowers to trash trucks.

In addition, Cole noted, students are paid to learn at the City. “We give them 25 hours a week, and we adjust the work schedule to fit their school schedule. Sometimes they work the mid-shift; sometimes they work evenings, sometimes day shifts. We have one of our senior mechanics assigned as mentor to the three guys. We also have a curriculum, which I’ve shared with many other cities.” 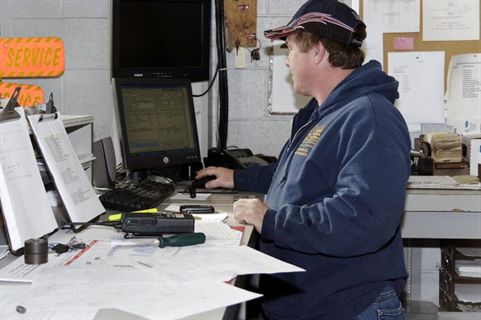 Cole said his staff members’ now enthusiastic embrace of the program represents a complete turnaround in attitude. “Initially, our mechanics didn’t want to do this,” he commented. “They said, ‘Oh no, we’ve got to teach some wet-behind-the-ears kids again.’ But these are good kids we’ve got; they want to learn, and they want to work here. So it got to the point where the mechanics actually said, ‘Hey, let me have one of those guys; let me have Jason; let me have Mike help me.’ They do their work well, and they’re energetic youngsters.”

The PCC program was Cole’s third attempt to set up an internship program. “We tried it first with high school kids. Then we tried it through the Glendale Youth organization. The thing about college kids is they’re a little bit more mature, and they really do want to get into the work force,” he said.

The interns must be at least second-semester students, Cole noted. “A lot of kids get into the field of auto mechanics because they want to learn something about their own cars, so they take a semester of basic auto shop. If they’re not into their second semester, and they’re not taking a full load of auto mechanics, we’re not interested in them. We want somebody who wants to come in here and wants to learn, and wants to build a career.”

Cole believes the program prepares the student to work for any city or public sector fleet. “If we don’t have a position open up for a long time, I encourage them to apply at other cities — Pasadena, Burbank, Inglewood, Santa Monica.” Cole circulates job opening notices and encourages the students to apply. “We want to keep things moving for our program, to keep the fresh blood flowing. It’s really exciting. It’s been wonderful working with these guys. I couldn’t be more proud of all of them,” Cole said.

Cole, citing a line from Henry Ford’s book, Today and Tomorrow, said, “Ford says that he has to have men who are willing to work. I really feel as if everyone we have here is willing to work. People usually think of City employees coming to work, and three guys show up, two leaning on their shovels, one digging. That’s not the case in my shop.”

This professional work attitude is one result of the programs and training his staff receives and Cole’s insistence they have the right tools so they set a good example for the young interns.

Two essentials in a well-run shop are experience of age and enthusiasm of youth, said Cole. “You’ve got to try to put both of those things together. I’m an enthusiastic guy. I like to get out there and be kind of hard-charging, so what I’m trying to do is keep a good mix. You have to have young folks coming in; that’s going to be your future.”