It's a startling fact: in the Los Angeles basin more people die as a result of air pollution-related illnesses than in car accidents. The City of Long Beach, Calif., fleet takes pride in doing its part to reduce harmful vehicle-created emissions.

With a history of running environmentally friendly fleets dating back to the 1970s and a continued commitment to their cause, the City earned the No. 1 place in the 2008 "Government Green Fleet" award.

"All of us at the City of Long Beach Fleet Services Bureau were ecstatic upon learning we were to be awarded the No. 1 Green Fleet in North America," said Carlos Velasquez, acting manager, Fleet Services Bureau. "We were elated to hear we received this honor, but also tempered at knowing we can and must do more."

The City of Long Beach began employing cutting-edge fleet technology in 1970 with the purchase of 50 compressed natural gas (CNG) Ford Rancheros. In the '80s, the City invested in CNG police patrol cars and trucks, and in the '90s, moved on to employ CNG refuse trucks. The City continues to rely on CNG vehicles and, since 2000, has added liquefied natural gas (LNG) units such as street sweepers, refuse trucks, and pothole trucks to its fleet, in addition to gas-electric hybrids and biodiesel-fueled beach tractors.

"Long Beach was the first city in the country to use LNG sweepers as part of its fleet," Velasquez said. "LNG vehicles burn clean natural gas and replace diesel-burning engines that produce particulate matter and leave a much heavier carbon footprint. LNG engines also require less internal maintenance because of the clean-burning properties of natural gas. The public has benefited by much cleaner air, reduced costs in maintenance, and steady, low prices of natural gas." 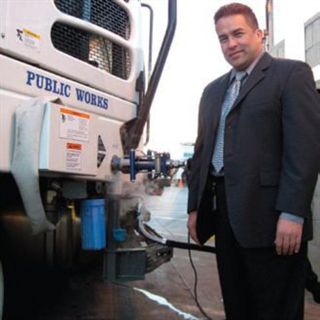 Partnerships are Key to Being 'Green'

In all, nearly half the City's 1,700 vehicles are powered by alternative fuel and produce fewer emissions than traditional counterparts. To consistently increase this contingent of environmentally friendly vehicles, Long Beach Fleet Services employs a strategic vehicle replacement program. As vehicles become more expensive to maintain than replace, Fleet Services meets with city agencies to encourage the choice of either alternative-fuel or hybrid replacement vehicles.

"Fleet Services has great cooperation and partnership toward being green with other departments within the City and has been able to become the No. 1 Green Fleet in America by the synergistic understanding from the public and the various city departments," Velasquez said. "We believe it is vital that a statistical analysis showing the return on investment of hybrid and alternative fuels be displayed to our departmental customers during fleet review meetings. Emphasis on the long-term gain of fuel efficiency, less maintenance, and less impact on the environment helps our customers make green decisions."

Thus far, this replacement strategy has worked. For instance, the city's Environmental Services Bureau will replace its entire refuse vehicle fleet with cleaner-burning LNG by 2010. In addition, the city's street sweepers are mostly converted to LNG, significantly reducing their carbon footprint and resulting in more breathable air.

Another key element in Long Beach's green fleet is its focus on implementing new technologies. Recently, the City incorporated plug-in technology in four of its Toyota Prius Hybrids, increasing the mpg rating up to 100 miles per gallon. The city also fitted diesel-operated fleet vehicles with particulate traps to minimize environmental impact.

One such strategy was placing outposts for minor repairs and preventive maintenance at decentralized locations. This approach meant shorter trips to maintenance facilities and fewer gallons of fuel used.

"Increasing the tank size has eliminated the need for sweeper drivers to return to the yard halfway through their route to refuel, as was necessary with the previous model," Velasquez said. "This has contributed to labor reduction, fuel savings, and greenhouse gas reduction."

Continued Commitment to 'Green Up'

One Long Beach Fleet Services strength is its continued commitment to evolving as a green fleet through employing new technology and seeking ways to run more efficiently. Velasquez said the City intends to continue this pledge.

Although Long Beach has been recognized as the pinnacle of green government fleets, Velasquez said they still have important goals to meet. "Being the No. 1 Green Fleet in North America is a great honor," he said. "During this transitional period within our society of moving away from fossil fuels for powering our fleet, we will not tire or falter in our efforts to 'green up' until we have become a 100-percent non-carbon producing fleet. We must always seek grant funding when available, work with manufacturers, and partner with departments in their acquisition needs. The rewards are great for these tireless efforts. Every effort, even seemingly small ones, can make a difference. We can all make a difference, but we must forge forward with passion, bearing in mind the future of our children and their children's future."