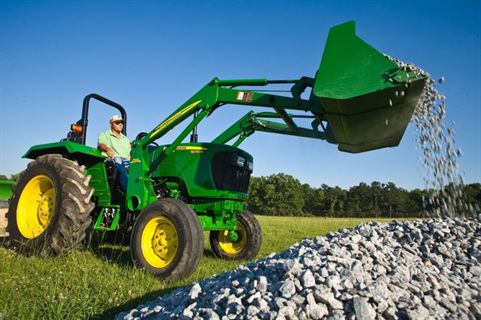 The new 5 Series is "the most complete line of utility tractors" John Deere has ever offered, according to Rex Edmunds, division marketing manager, John Deere Augusta. The series includes models 5D, 5E, 5E Limited, and 5M.

Ranging from 45 to 105 horsepower, the product line is "designed to perform any application, with any implement, within any budget to meet the needs of any customer in the utility tractor market," according to John Deere press materials.

"Low on the frills and price," the 5D and 5E models feature a range of horsepower from 45 to 75. The 5D Series is offered in a 2WD axle, while the 5E offers 2WD or mechanical front-wheel-drive (MFWD) configurations.

Additional features includes a cab, wet clutch design, 2WD and MFWD, more hydraulic flow and capacity, and a durable frame designed for loaders. The 5M tractors offer a horsepower range of 65 to 105.

Building on the John Deere 6003 Series tractors, the new 6D Series provides more features and economical value, according to the manufacturer.

The 6100D features a 100-hp PowerTech engine with rotary fuel injection pump. The 6115D-6140D are powered by a 4.5L PowerTech E diesel engine with a high-pressure common rail injection system. According to the manufacturer, all models deliver up to 25-percent torque rise.

The 6D Series tractors are also offered in 2WD or MFWD configurations.

The 6D Series transmission has been improved, according to Alejandro Galindo, product manager, John Deere Waterloo Tractor Works. "The all-new electro-hydraulic 9F/9R PowrReverser is standard equipment," Galindo said. The PowrReverser features nine forward and nine reverse speeds, topping at 17.6 mph. Once the range and gear is set, the operator manipulates the left-hand reverse lever to move the tractor forward or reverse without using the clutch.

The tractors’ independent PTO system offers a choice of two speeds, 540 and 1,000 rpm, that can operate a wide variety of implements. The operator simply adjusts the PTO stub shaft to shift between the two speeds. In addition, the PTO unit remains running during clutching, stopping, or downshifting.

The cab configuration has been redesigned to provide increased visibility. Repositioning the hydraulic SVCs allowed relocating the exhaust pipe to the rear. Operators now have an unobstructed view to the front loader and rear drawbar.

Other cab features include a telescopic/tilt steering wheel and high-capacity air conditioning/heating system.

"The hydraulic flow on the 6D Series has been increased up to 46 percent depending on the model," said Galindo. "There is more flow and pressure for demanding loader, three-point hitch, and implement work."

The new tractors’ service intervals have been increased, according to Galindo. The hydraulic oil change interval is now 1,000 hours. The tilt-up hood allows easy engine air filter and radiator coolant check, and the air filter can be replaced without the use of tools.