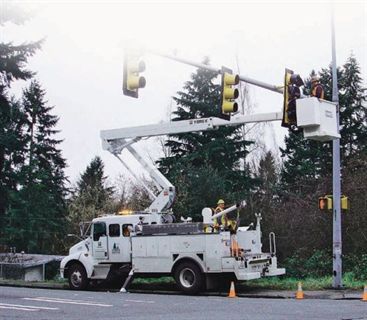 Medium-duty hybrid trucks, like those of the King County Department of Transportation (KCDOT), are more than paying for themselves, while significantly reducing greenhouse gas emissions.

The Seattle-based KCDOT put its first Class 7 hybrid-electric vehicle, a Kenworth lift truck, into service September 2007. An International Truck & Engine hybrid hauler and another lift truck have been added.

As other trucks in its fleet age and must be replaced, King County plans to buy new hybrids whenever possible.

Harold Taniguchi, KCDOT director, said the Kenworth has been "exceeding expectations in performance and driver acceptance, as well as fuel economy."

KCDOT's hybrid Kenworth is equipped with a utility bucket atop a 50-foot boom, longer than the standard aerial lift, and used primarily to maintain traffic signals.

Spearheaded by Windell Mitchell, former director of King County's Fleet Administration Division now retired, a consortium of local and state governmental agencies, purchased a total of 10 hybrid vehicles and plans to buy more. The consortium aims to take hybrid vehicle technology to the next level with production of medium and heavy trucks.

Through the purchasing power of that consortium, Mitchell negotiated a deal on the cost of the Kenworth's hybrid-electric system.

At the time, such hybrid-electric systems added $60,000-$65,000 to the cost of a medium-duty. KCDOT paid that premium for its two subsequent International hybrid truck purchases.

With the medium/heavy truck hybrid market opening up and other manufacturers such as Peterbilt, a division of PACCAR Corp., and Freightliner Division of Daimler Trucks North America LLC now offering the systems, prices have dropped into the $40,000-$45,000 range, said Toppen.

And that, coupled with sharply higher prices for diesel fuel, has turned these hybrids into money-saving investments.

KCDOT originally calculated it would take eight years to recoup the cost of the hybrid trucks. Now, however, the payback is coming "much quicker than we anticipated," said Toppen.

During the first 5,000 miles of operation, the hybrid Kenworth provided a 30-percent improvement in fuel economy over a comparably-equipped conventional truck, according to Toppen.

But he's optimistic economy gains will be much higher, "once the main engine is broken in," i.e., its original tight tolerances loosen up and it runs more freely.

The truck requires additional duty time/mileage before a thorough evaluation is possible.

"There are job functions in which the truck is in almost a continuous duty cycle. By the same token, there are periods when a person is up on the lift and working, and there's no need to run the engine or the hybrid system. So, we still need to get a better average for the usage," Toppen said. "But I'm optimistic we can get as much as a 50-percent fuel economy improvement, when all is said and done."

In addition, because the hybrid battery pack alone typically is required to run the hydraulic system to lift and raise the boom, the engine runs only a fraction of the time required in a similarly equipped conventional truck.

As a result, Toppen also expects to get two extra years of life out of the truck, along with the benefit of reducing greenhouse gas and particulate matter emissions.

Eaton Corp. of Cleveland supplies the electric-hybrid system to manufacturers International, Kenworth, Peterbilt, and Freightliner; and the system is basically the same for each.

Above 30 mph, the Kenworth hybrid operates as a standard diesel vehicle with all power coming from the engine during steady driving conditions. Below 30 mph, it uses a combination of diesel and electricity with the system automatically switching between the two modes of operation.

Electricity generated through regenerative braking is stored and used for acceleration, assisting the diesel engine. As a result, the truck provides low-speed, on-road, and stationary operation fuel savings.

As indicated, the motor must be running for the lift to operate on a conventional truck. With the hybrid model, the lift is powered by the energy stored in the hybrid battery pack, making it both "cheaper and quieter" during lift operations, said Mitchell. Operating the lift on electric power also reduces emissions.

During hydraulic operation, the engine typically only restarts and must charge the hybrid battery pack when it is discharged and drops to a certain voltage level. Such recharging takes about six minutes.

The need to refuel less often also allows crews to remain in the field for longer time periods, an important advantage when 12-hour shifts are required during storms and other emergencies.

"Employees can travel farther and get a lot more work done, without making return trips to the county's fueling station or purchasing higher-priced fuel at a retail location," said Mitchell.

KCDOT's second purchase, a hybrid International recovery truck, is capable of hauling two vehicles at once. It operates as a wrecker (without the wrecker's boom) and has a flatbed onto which one vehicle can be loaded while it tows a second one.

The truck configuration isn't new, but outfitting it with a hybrid system is.

The hybrid system does not run the engine during cargo loading and unloading, saving fuel. Fuel consumption is also reduced during on-road driving when the hybrid batteries provide additional engine power.

The truck's smaller engine produces further fuel savings and environmental benefits. Downsizing the engine is possible because of the electric motor assist, which adds 60 horsepower to the rear of the truck.

King County's third hybrid is an International medium-duty aerial truck — basically a smaller version of its Kenworth, with a 35-foot boom designed to enable a worker to access tighter spaces.

The boom and body were installed by Altec's E-Town Manufacturing Division, based in Elizabeth, Ky.

KCDOT uses B-20 biodiesel to fuel the hybrids, as well as its other diesel trucks. The blend of 20-percent biodiesel and 80-precent ultra low sulfur diesel provides additional reductions in greenhouse gas emissions, especially important for King County.

In 2006, the County joined the Chicago Climate Exchange, where members buy and sell "carbon credits." By joining, the County made a legally binding commitment to reduce its emissions of carbon dioxide and other climate-altering greenhouse gases each year.

Driver response to the new vehicles also helped make the early hybrids a valued part of the county's fleet.

"Our drivers really like the hybrids," said Toppen. "I've driven the Kenworth myself," he added, praising its quality. "The PACCAR PX-6 engine provides good power and acceleration, and even when the engine is running, you can barely hear or feel it."

When the consortium was formed, $400,000 in grants was secured to help defray the cost of hybrid truck purchases for members. The consortium received $250,000 in grants from the Environmental Protection Agency (EPA) and $150,000 from the Puget Sound Regional Council of Government in Seattle.

Along with the three hybrids purchased by King County, the City of Seattle ordered four medium-duty hybrids, including a utility truck, a cargo carrier, and two flatbeds with cranes.

Two of the vehicles have been delivered and two are en route, according to Melody Bennett, project manager of climate change for King County's Fleet Administration Division. Bennett has been tracking consortium member activities for King County's fleet group.

In addition, Snohomish County ordered one hybrid, a field service truck, and the City of Renton purchased two hybrids, an Altec boom manlift, and a Braun aid vehicle.

The City of Tacoma originally wanted a hybrid refuse truck, but that particular application wasn't available at the time. The city changed its order to a more conventional application, Bennett said.

Other governmental groups have expressed interest in joining the consortium. But the group has been chiefly concerned with complying with its grant requirements.

"Once we get all the trucks/orders rolling, we'll have more time to consider additional members," Bennett said.