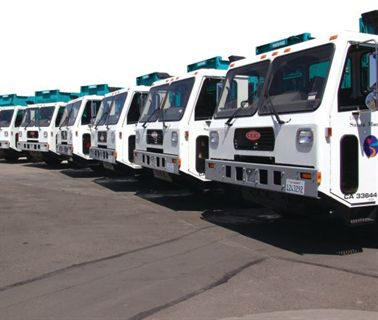 Setting its first vehicle emissions-reduction policy in 1993, the City of Santa Monica, Calif., was an early adopter of using alternative fuels to address both budget-cutting efforts and local municipal and residential desires for cleaner environments.

The 1993 policy goal included powering at least 75 percent of City vehicles with alternative fuels. The alternative fuels could include a combination of options from natural gas to propane to electric.

In the 15 years since the City’s policy was implemented, more than 84 percent of municipal fleet vehicles now use an alternative fuel. The result has been lower cost of fuel per gallon and a reduction of over 1500 metric tons of greenhouse gas emissions.

Natural gas vehicles currently comprise 236 of Santa Monica’s 450-vehicle fleet. The price of a gallon of natural gas has ranged between $1.25 and $1.50 in recent months, a cost per gallon significantly cheaper than either gasoline or diesel, said Santa Monica Fleet Administrator Rick Sikes.

A variety of other alternative-fuel vehicles are deployed in the City’s fleet, according to Sikes, including 81 biodiesel-fueled vehicles, 40 electric vehicles, 15 hybrids, 13 propane-powered vehicles, six hydrogen-powered cars, and two solar-powered traffic signaling trailers. Seventy-three of the fleet vehicles are traditional gasoline-powered cars.

Clean Energy, the largest provider of natural gas for vehicle use in North America, has also opened a natural gas station available to the public within city limits, Sikes said.

"The strategy works for Santa Monica largely because area residents are more environmentally conscious and we have support from the city council and other political leaders", Sikes said. "Of course having your boss being a proponent helps too."

Renee Cowhig, the City’s maintenance manager, oversees fleet management and is a long-time supporter of alternative-fuel technologies. She drove one of the original electric vehicles and currently drives a plug-in Prius. "There will be issues to resolve and without this kind of support it would be impossible to reach these goals," said Sikes. 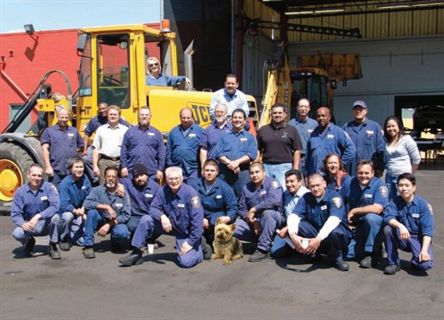 Other public sector fleets throughout the country have consulted Sikes on establishing an alternative-fuel vehicle program. One challenge often found is a natural resistance to change that must be overcome before a program can be effectively implemented.

Sikes admitted he had it "easy" because the program in Santa Monica was already established when he arrived less than a decade ago. Developing and maintaining such a program from scratch takes "a lot of work and true dedication," Sikes said. However, a number of other municipalities, including Riverside, Inglewood, and Culver City in California, and Las Vegas have instituted similar plans.

Municipalities in other states such as Texas, Washington, and Minnesota have also considered alternative-fuel programs. Some Minnesota municipalities are researching methods to use such biofuels as ethanol to power their vehicles.

The City of Austin, Texas is taking a proactive approach to this strategy. In February, Austin awarded a $138 million contract to Houston-based Sun Coast Resources Inc. to provide alternative fuel for the City’s fleet of vehicles and equipment. The six-year contract secures an estimated 3.2 million gallons of E-10 gasoline and 3.2 million gallons of biodiesel fuel for the city fleet.

The move marks another step in the City’s implementation of the Austin Climate Protection Plan, introduced last year by Austin Mayor Will Wynn. The plan calls for all city facilities, fleets, and operations to be carbon-neutral by 2020.

Austin fleet officials will convert several City fuel sites to accommodate alternative fuels. Following the conversion, more than half (roughly 51 percent) of the City’s fleet vehicles and equipment will operate on an alternative fuel or hybrid technology. Until replaced according to the fleet schedule, remaining fleet vehicles will run on an alternative-fuel blend of E-10 (90-percent gasoline, 10-percent ethanol) compatible with most engine systems without modification.

"Through these types of groups, you can network, become better educated, and learn about available technologies," Sikes said.

The City of Santa Monica and other municipalities are increasingly realizing that carbon dioxide emissions from the combustion of petroleum fuels are a major source of man-made greenhouse gas emissions. The use of less harmful fuel sources is an environmentally responsible action that can have positive financial impacts, although the City’s move isn’t budget-driven, Sikes said.